I got more books because of reasons

May 30, 2013
I am officially older. As you know if you follow me on absolutely any social media. BUT FOR THOSE WHO DO NOT, I decorated a cake for myself: 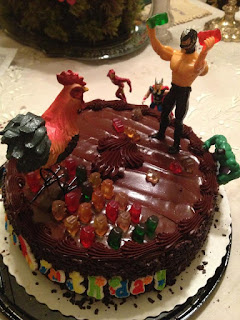 And, of course, despite my idiotic current state re books (OMG YOU GUYS I HAVE 28 ITEMS CHECKED OUT FROM THE LIBRARY AND I CAN ONLY CHECK OUT 30 MAX I HAVE A PROBLEM HELP MEEEE), I got some more of them. 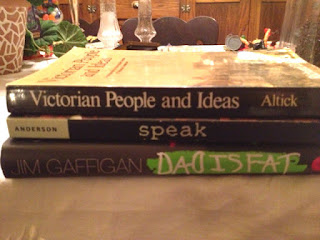 So...Champaign, Illinois is home to the University of Illinois (where I went and it is awesome, so be aware). There are university people and there are townies, and the two clash in the Books section of Goodwill. I found a multi-volume set of the diaries of Samuel Pepys there last December. There's also, of course, a panoply of semi-creatively-named romance novels.

So of course I found Victorian People and Ideas, because what Goodwill DOESN'T have that, and also Speak by Laurie Halse Anderson, which I am scared of, because it deals with Serious Things, but it seems to be one of those Actually Good YA Novels, and I'm pro-those.

Dad Is Fat is hilarious and I wanted it because I've been quoting Jim Gaffigan since 2002 and THAT IS A LONG TIME. Remember when Comedy Central mainly just broadcast half-hour standup specials, bad '80s movies and rerun after rerun of SNL (prompting brief obsessions with both Molly Shannon and Jan Hooks)? I like to call those "the Glory Days." So that's how I found Jim Gaffigan (and Maria Bamford and Jackie Kashian and Kathleen Madigan and Wanda Sykes, but I digress) and I'm really really psyched to read his book, because he posted the first chapter online and all I wanted was to read more of it. NOW THAT OPPORTUNITY IS HERE.

I also ordered Vindication of the Rights of Woman, because Barnes and Noble didn't have it. Yeah. I know. The girl working there and I were indignant. I had a library copy, but I need my own so I can mark it up with things like "SASSINESS" and "I'll bet Mary Wollstonecraft really would've appreciated that Meredith Brooks song." (side note: that song was on repeat when I read Simone de Beauvoir's The Second Sex in college and that experience is THE BEST).

For New York, I packed Where'd You Go, Bernadette?, Dad Is Fat, Speak, and Alice Paul and the Battle for the Ballot, because I am OBSESSED with this vid and if you haven't watched it at least ten times, I don't get your priorities because omg it is the greatest and if I met anyone involved with making it, I would giggle CONSTANTLY: