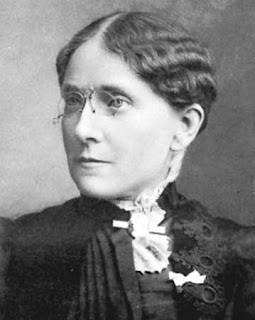 FRANCES WILLARD. You got your shit together on such a massive scale later in life, and you led the first international women's organization and you helped refugees and you were responsible for so many social programs, but when you were 20! You were such a tormented young lady.

Only feeling romantic love for women must have been so ridiculously confusing in 1860, and to have your best friend in the whole world who you were secretly in TOTAL CRAZY LOVE WITH be engaged to your brother must have been so incredibly painful and perplexing. You're supposed to be happy! She'll be in your life forever! But instead you're just jealous and angry and you feel like something's wrong with you and people are calling you abnormal and your brother's pulling you off to the side to tell you to cut it out and omg.

20 year old Frances kills me, which is probably why I read that year more than any of the others in her online journals. She's engaged to a man named Charles Fowler after knowing him for a month. She very quickly realizes that what she feels for him isn't at all what she feels for her best friend Mary. Mary's engaged to Frances's brother Oliver, and everyone in this foursome is upset. The fact that Frances eventually broke her engagement to Charles speaks to me of her immense courage and inability to live a lie. She struggled with that decision. Her family told her not to do it. And she did it anyway.

Given that she kept her journals her whole life and made notes on them later, I'm astonished she didn't excise these passages. Frances Willard, you were just a kickass person:

Ours is such a Love as no two women ever had for each other, before. It is wild & passionate, deep & all-pervading. It is "abnormal." it is impossible, let him never so generous (the underscored pronoun having, this time, two applications) for this to be other than a painful& almost intolerable subject of thought. We cannot be together. Fate & circumstance decree it. O how hard it is, My Darling! my cherished, blessed, idolized Mary! It touches me-it lacerates my heart in its tenderest spot. (God forgive me-& not God only!-that this is so, though I have prayed & agonized & taught myself as best I could to have it-as you say it is with you-at least that way.) It stirs up the very depths of my nature. You are wound in with my heart of hearts.
Can I help it? Is it wrong? Will God damn me for it? Did he send this Friendship which I thought my choicest Blessing only to poison it & turn it to a curse? What can I do? What must I do? I get no light-no answer. How I wrong the truth of my heart. (Whether it be a right truth or not.) Tonight when we turned listlessly & indifferently from each other ! I could have called you every dear, sacred name our language yields; I could have pressed you to my heart that used to be so proud & calm but aches & moans so steadily now; I could have kissed your lips & forehead a thousand times in one & looked into your beautiful, forgiving, regretful eyes till the tears stood in my own-& I would not.
It is for your sake-for theirs-for justice. O God! it hurts me so! You love me & it pains you, I am sure. I worship you, & it takes all the joy out of my Life. You have God left & Oliver. I have the keen belief that God is angry, that I am very wicked- that Charlie & I are estranged. How I wrong him! Who would think that I appreciated his nobleness & generosity-forgiving, forgetting, suffering. I would help it, if I could. I will try.
------------------------------------------------------------------------

OMG. How can that not kill, every time you read it? To see her at 20, writing all that out by hand, saying about this girl. "I worship you, & it takes all the joy out of my Life." How confusing, how terrible, how absolutely soul-castigating that time must have been for her. And who was she supposed to turn to? She was living in rural Illinois in the 1860s. The only support she had was from her mother, who while wonderful, was also among those who told her to keep her engagement to Charles Fowler.

There can be nothing but gratitude for those great figures who allow the parts of themselves that are most flawed and most conflicted and most human to see the light of day, an act which can do nothing but inspire the rest of humanity and make them see that they can achieve as much as those who went before them.