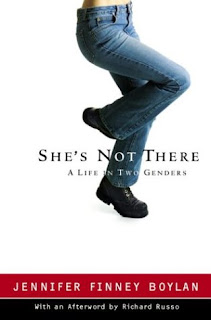 You know how last year you'd catch a random episode of I Am Cait, and suddenly you'd be like, who is this extremely articulate and intelligent woman talking on this reality show and why does her name sound familiar?

Well, that woman was Jennifer Finney Boylan, and her name sounded familiar because you've had a copy of her 2003 memoir She's Not There on your shelf for approximately 5 years.

Boylan is an extremely intelligent English professor who used I Am Cait as a vehicle to speak about transgender rights and issues. Her memoir covers her life from small child to married transgender adult with a family and a professorship. And weirdly enough, best friend Richard Russo, author of Pulitzer Prize-winning Empire Falls.

I really loved She's Not There. It's especially brave for the time in which it was written, and it's a clear narrative of her struggles and resolution of the fact that she was born with an exterior that did not match who she naturally was.

Her theme throughout is that love could save her. From childhood, she felt that if she could find someone to love enough and who could love her enough, she would be "cured" and everything would be all right. She then had to deal with the destroying realization after she had achieved that kind of love that this feeling that she was not living as the person she truly was was still there.

It's written extremely well (thank God, since she's an English prof) and the only charge I've seen levied at it is that it doesn't deal enough with the abuse transgender people have to face. This is true. There is a lot of focus on the affirmation she received in the face of her transition, and a feeling of maybe skirting around some of the harder parts. She does say her sister cut her off completely, and she spends a good deal of time discussing the pain she knew she was causing her friends and family, but they all stay with her.

Jennifer's story is also, of course, just her story, and should not be seen as typical of every trans person. She had health insurance, and money, and a support network, and the ability to "pass" as a woman despite transitioning in her 40s. Janet Mock's book Redefining Realness would be a good companion piece to this, although Mock also rarely has to deal with being seen as male in public.

One of my favorite scenes in the book is her first address to students post-transition, when she and grouchy but apparently lovable colleague Charles Bassett were going to read ghost stories to students in the chapel on Halloween.


Just at that moment I felt a sudden inspiration. I knew I wanted to say something, but on the other hand, I hadn't wanted to say too much, either. So I looked over to Charlie and said, "Hey, is it just me, or does Charlie Bassett look really different from last semester?"

There was some nervous laughter.

This time everyone laughed. They got the joke. Bassett sat there grimacing.

And with that, the entire place went nuts. They burst into applause. They cheered and hollered and stamped their feet.


No, this is not everyone's experience as a transgender person. But I suspect, especially in 2003, Boylan wanted to show an "it gets better" kind of picture, as well as a look into what it's like being treated as a man and as a woman in our society (note: along with that, there's a somewhat frightening scene of sexual harassment towards the end).

I recently found this clip from I Am Cait of Jenny Boylan and Kate Bornstein very lovingly debating the use of the word 'tranny,' which whatever you think about that show, this is the kind of debate I want to see more of (note: this is about the use of the word WITHIN the community and not by anyone outside it):