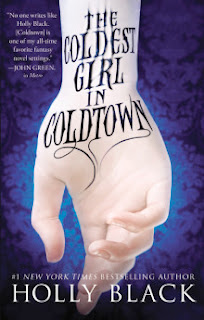 Holly Black's The Coldest Girl in Coldtown is about a world where--VAMPIRES! VAMPIRES EVERYWHERE! Except more specifically in Coldtowns, which are like big walled in areas where they keep the vampires. Only they haven't caught all of them, so you still have to take precautions in normal life or you could get bitten and then infected and then you either have to sweat it out for 88 days and somehow not drink human blood, OR, you go to Coldtown.

ALL ROADS LEAD TO COLDTOWN.

So the main character is Tana and she's 17 and she wakes up the next morning after a party and all her friends are dead. That is the BEGINNING. She finds her ex-boyfriend still alive in a room, but bitten, oh and there's also a vampire chained up in there. But said vampire warns her that the other vampires are calling from inside the house so she's like "oh shit" and they all get outta there.

But who is this mysterious, sexy-but-dangerous (and helpful!) vampire? What's up with her infected ex-boyfriend, is he gonna be nice or a tool? And what does Coldtown look like??

This was a pretty damn good vampire book. In the list of vampire books I've read, it's high up there for page turnability and also for the scariness quotient for its vampires. There's like 10 seconds of "I am a powerful creature of the ages but I am so attracted to you, high school girl" but it's over pretty quickly and the rest is Well Built Vampire World.