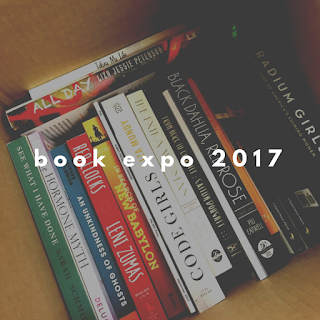 One of the best things about a convention is most people are there for the same reason: they have some deep interest in whatever it's about. Hopefully. If they don't, then it must be hell on earth. But let's focus on those who do!


BookExpo America is like Comic Con for book nerds, especially if you're attending for press coverage and not on behalf of one of the many publishers. I went as a Book Riot contributor and wandered around for 2 days with Kim of Sophisticated Dorkiness. Kim covers a lot of non-fiction, and I tend towards history/lady-things/LGBT books, so we had some nice crossover in what ARCs we wanted to grab. Most of the books given out at BEA are fall releases, so you get the ARCs, then have a nice couple months to read them.

Our first book we bee-lined for was about baking powder. Obviously. 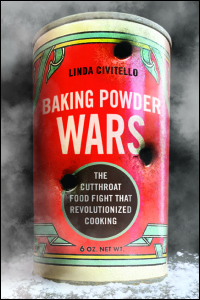 Baking Powder Wars is NOT ONLY being published by University of Illinois Press (so, my alma mater), but also has an A+ cover. We basically ran to their booth at 9 AM the first day the show floor was open. Like everyone else was gonna be grabbing this history of baking powder like it was the new Leigh Bardugo Wonder Woman book (the line for that was truly insane).

My goal for BEA was to find mostly women-centered books, as that's what I was going to be writing about for Book Riot. Last year I ran around photographing tote bags, but then I ended up with like 15 tote bags and my girlfriend has basically forbidden me from getting more (I ended up with appx 5 on this trip, mostly on accident).

Some really good lady books had already been published (and therefore weren't 'upcoming') but they're not that well known, so I feel they should be mentioned. FOR EXAMPLE: 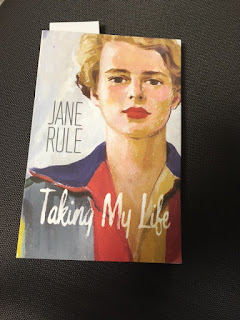 OMG look at that pretty book. It's a JANE RULE AUTOBIOGRAPHY. "Who is Jane Rule?" you ask. Well, I can't fault you for that question, because you pretty much just know who she is if you're immersed in the world of lesbian fiction, and I guess I understand that not everyone is. Jane Rule wrote Desert of the Heart, which is a pretty stellar lesbian novel about a professor who goes to Nevada to get a divorce because her marriage is missing....something (GUESS WHAT IT IS if you guessed 'a lady' you are right). There she meets another lady and they eventually get it on.

Desert of the Heart was written in 1964. Yep. 1964. It was one of the first lesbian fiction books published as a hardcover instead of immediately being cast into the pulp fiction category, then Talonbooks published its paperback reissuing in the 1970s. And Talonbooks is who's publishing Taking My Life. God bless that Canadian publisher.

So day one, I FedEx'd a box of books home to Chicago. Day two (the floor was only open 2 days instead of 3 this year) I was my own pack mule, weighing down each side of me with a tote bag full of books, and packing them all in my Huffle duffel to carry on the plane.

Other exciting things to see included the line for Kate Moore's Radium Girls (published by Chicago-area press Sourcebooks), which wrapped around the booth and down the aisle. This was for a lady-centered nonfiction book -- not the latest YA release (however great that also may be). Unsurprisingly, the longest wait lines at BEA tend to be for the now seemingly perennially popular YA releases, and things you know are going to be big because the authors have won awards or had previous bestsellers, like Celeste Ng and Jennifer Egan.

What I find fascinating is you can see someone else's BEA experience, and it will be completely different from yours. I've seen people with appx 30 books posted, and I didn't see any of them on the show floor. There are so many books being tossed around at any given time, it's essentially impossible to keep up. There was a Jeffrey Eugenides short story collection being given out at 9:30 AM on Friday, and I just didn't want to leave the apartment that early. The aforementioned Celeste Ng line was crazy, but I did sit my ass down on the convention floor 40 minutes early in order to get Jennifer Egan's Manhattan Beach (and YES I TOLD HER THE POWERPOINT CHAPTER MADE ME CRY).

I think I got around 40 books. Which isn't great in my whole "get rid of books" scheme, especially after the 20+ I just got in London, but it does further my secret plan of dying in a walled-off fortress made of books.

Book people are great. Book conventions are great. Let's all snuggle up with our books and enjoy them like Rowan Atkinson here: