Do you know the Belvedere at the Rigi Kaltbad, looking over the corner to a vast world below, on a fair day in May, when the air is clear as crystal and the lake ultra-marine? When the Bernese Oberland undulates away in unbroken snow, its pure whiteness like cold marble, the shadows grey-blue?


Ok I googled Bernese Oberland, because I legit thought it was another name for a Bernese Mountain Dog and she was like "you know how that dog jumps around in the snow and it looks great" but it is in fact this: 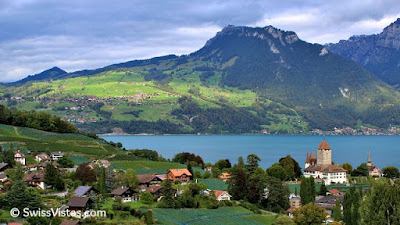 Unnamed Woman and Paul are wandering around, and she asks if he'd ever wanted to kill someone: "to have them there at your mercy, to choke their life out and throw them to hell?"

She says she would want to kill one man, a rotten carrion on this earth, and Paul is AGHAST because she is his beautiful angel lady and they do not talk about things like carrion. Anyway, she shows a bunch of passion and Paul is like hm, foreigners, but then he's like NO WAIT, I would ALSO kill someone because of her. Which doesn't feel super healthy, but #youths. She finds the gun her servant gave him and she turns even whiter than normal and so the mystery deepens because she's definitely hiding from someone, but we don't know who yet. And at some point she's probably going to make a noble sacrifice for Paul, who will remember her all his days as he returns to his responsible life as a rich Englishman.

That is just a prediction though.

It's been two weeks, by the way, since he first hated and then was obsessed with this woman whose name he still doesn't know. They're so upset to spend a night apart for once that she bites a handkerchief through, which I didn't know was a thing people did, but if anyone was to, makes sense for her.

There's a horrifying bit that I'm sure other recappers of this insane novel have commented upon, but Zalenska says:

You see, Paul, a man can always keep a woman loving him if he kiss her enough, and make her feel that there is no use struggling because he is too strong to resist. A woman will stand almost anything from a passionate lover. He may beat her and pain her soft flesh; he may shut her up and deprive her of all other friends—while the motive is raging love and interest in herself on his part, it only makes her love him the more. The reason why women become unfaithful is because the man grows casual, and having awakened a taste for passionate joys, he no longer gratifies them—so she yawns and turns elsewhere.

They go to Venice, and in scenes like this, she absolutely reminds me of Helen Sinclair in the only scene worth remembering from the movie Bullets Over Broadway, with her dramatic exclamations of "DON'T SPEAK!"

In Venice she's decorated with those classic subtle colors of orange, purple, and green, and "undulates" around Paul in a perfectly normal undulating way. They go off in a gondola of course and are followed by a new shifty servant.

They walk to a piazza and some pigeons take corn "from between her red lips," which is DISGUSTING do you know how many DISEASES pigeons have, good LORD.

She uses the n-word and then tells Paul she's beaten her servant before, so she's starting to seem pretty damn terrible. She also does an "if I can't have you, no one can" so that's terrifying.

The section ends with them being spied upon from a gondola (again) and she tells Paul she wants them to have a baby that she can put on a throne, which Paul is obviously pretty into. This book is unendingly ridiculous.