On Anarchists, and I Buy Too Many Books

March 28, 2011
I've been feeling overly maudlin the past few days, so when I realized Friday was the 100th anniversary of the Triangle Factory Fire, I thought that was the perfect time to indulge my feelings and just get out and out sad about something legitimate instead of the fact the latest episode of Parks and Rec just wouldn't seem to download.
Cornell has a really good archive of information about the fire here, and most of my time was spent there. Then Saturday and Sunday I traveled downstate to visit my parents, and CNN had an amazing HBO documentary about the fire, which I watched twice (again, indulging maudlin state). In the course of the documentary, they mentioned Rose Schneiderman, who is this piercing young lady right here 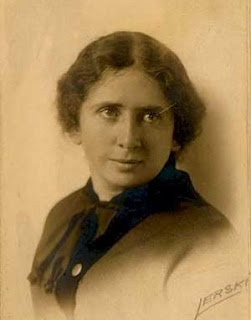 and so I started reading up on her, but while I was reading I kept listening to the musical Ragtime, as anything about early 1900s labor strikes reminds me 'The Night That Goldman Spoke at Union Square.'
A quick skip from that song, and I spent all today reading about Emma Goldman, whose ideas I don't fully agree with, but whom I respect immensely for 1) Wanting better things for the lower classes and 2) Actually doing something about it. She put an immense amount of energy into doing what she thought was right, and yes, we could pull out the 'Hitler thought he was doing what was right' argument, but she was rather adamant that anarchism did not promote violence. 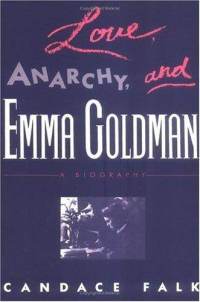 This all ended with me ordering this book, as the only copy at the Chicago Public Library is in the Reference section, and I'm not dealin' with that. All the other bios looked kind of dumb. I DID, however, photocopy almost all of her letters to Ben Reitman, who was a jackass and totally didn't deserve her, but she way loved him.
That's as far as I've gotten with the anarchists, but it's only been one day, so we'll see. I kind of feel like my energy's all gone in that area, though. I get really interested in something for like a day or two, then I stop caring.
To complete the 'I Buy Too Many Books' part of the title, when I went home, my mother and I went to Barnes and Noble, and she got me I Totally Meant to Do That by Jane Borden (it's a collection of humorous essays, and normally I just would've gotten it from the library, but she's young and presumably poor, so I wanted her to get more money), and Notes on a Scandal, which I've heard is quite good.
This is in addition to the way too many books I'm already not reading. It's a problem, I say. A problem!