Where I Kind of Defend Sarah Silverman, Which I Personally Am Surprised By 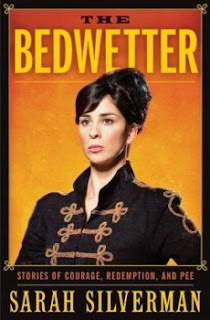 Here we go. A book review. To the extent that I can do one. I also want it known that this was written while listening to Taylor Swift, so if it has the faint air of teen angst and brooding over high school boys, that's probably why.

The mentioned-in-a-different-post Katie and I were at Books-a-Million downtown, and this was in the bargain section. Despite my Sarah Silverman reservations, I really like the cover, so I read the foreword. It was hilarious, I showed it to Katie, we bought it, she read it overnight because SHE IS THE FLASH when it comes to reading, then she gave it to me. It took me two days, which basically means it should be the fastest read ever for anyone else.

When I asked her how it was, she said "Depressing," which left me rather perplexed. It makes sense, though, after reading the first few chapters. About half the book will harsh your buzz on life. She talks about some really tough things, but I kind of felt like maybe that was part of the joke — Sarah Silverman's writing a book and you expect it all to be hilarious, but instead it's this pretty serious stuff, like her dealing with depression as a kid and subsequent addiction to Xanax.

BUT, it is also hilarious. This is her talking about her bedwetting problem (which extended well past the normal age) and how her parents sent her to summer camp anyway:

Summer camp, salvation to both my mom and dad — was, for me, a camp-fiery hell. My teeth were bigger than my face, I was coated in hair, and I smelled like pee. Of course, most events in life are about context. Had my parents instead sent me to live in the Baboon Reserve at the Bronx Zoo, I would have been happy and confident, judging the others for flinging poo, and feeling downright aristocratic.

Chapter titles like "I Am Awakened to the Existence of Harvard, and to My Not Having Gone There" made me extraordinarily happy, as I love a good title, and the book as a whole was pretty great if only because I feel slightly less condemnatory towards her now. She talks a bit about her comedic process, and why she finds certain things funny, and it also becomes clear that she's not an unfeeling asshole prepared to do whatever to shock the public.

In case you're like "Why am I even looking at this review? Who is Sarah Silverman? This isn't my house. Where am I?" then I have included this handy youtube vid of her. It's pretty awesome and that's all I've got to say about that. REVIEW DONE.