January 02, 2014
2013 was SO WEIRD. Can you believe the stuff not read at the beginning of the year that has now been read? GAH. My mind can almost not fathom it. ALMOST. Anyway. Here's a survey I stole from Alley.

Number of books read in 2013: 62. I would've beaten 2011 instead of tying, but someone pretty from Minnesota decided to start dating me, so. That took up some reading time.

1. Best Book You Read In 2013? Ok, I read a ridiculous amount of non-fiction this past year (17/62), and of that, the best was almost definitely the unfortunately-titled survey of romantic friendship from the 1600s to the 1970s, Surpassing the Love of Men by Lillian Faderman. It led to so much other research AND made me read Diana Victrix, which is SO good. Best FICTION, though...agh. I am not sure. Visit from the Goon Squad? Valencia? There were a lot of excellent books discovered this year.2. Book You Were Excited About & Thought You Were Going To Love More But Didn’t? NIGHT FILM, DAMNIT. Still bitter about that. Why weren't you scary, book. I so wanted you to be scary.3. Most surprising (in a good way!) book of 2013? Probably Love Story by Erich Segal, actually. I expected it to be pretty dumb and instead thoroughly enjoyed it. Although Michelle Tea's Valencia also seemed like something I would absolutely hate, and instead she became one of my favorite authors.4. Book you read in 2013 that you recommended to people most in 2013? Pretty sure that's The River of No Return by Bee Ridgway. Time travel! Sexytimes! Is anything else required of a book?


5. Best series you discovered in 2013? Best SERIES? Hm. I guess Scott Pilgrim, although really I just don't read a lot of series-type books.


6. Favorite new author you discovered in 2013? EASILY MICHELLE TEA. MICHELLE, IF YOU'RE READING THIS PLEASE COME TO CHICAGO AND TALK WITH ME ABOUT HOW AWESOME YOU ARE.


7. Best book that was out of your comfort zone or was a new genre for you? I was unsure about Ann Patchett's Truth & Beauty because I don't usually go for the 'memoir of a friendship' sort of thing, but I picked it up because hey -- Ann Patchett. And obviously it was great. Isn't Ann Patchett great? Yes, she is.

8. Most thrilling, unputdownable book in 2013? Easily The River of No Return. Get it, read it, love it.

9. Book You Read In 2013 That You Are Most Likely To Re-Read Next Year? Er...I don't really re-read books? But sure, in this alternate universe where that happens, what would AU Alice re-read. Hmmmmmmmmm. Probably the ever-gripping Diana Victrix by Florence Converse, Wellesley grad. 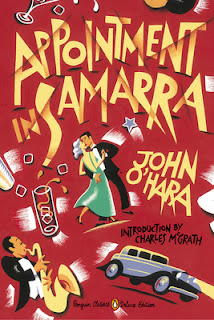 11. Most memorable character in 2013? That's hard. I don't remember characters' names easily. Either Offred from The Handmaid's Tale (which really was excellent, btw), or Hiram Grewgious from The Mystery of Edwin Drood. HIRAM GREWGIOUS I LOVE YOU.

12. Most beautifully written book read in 2013? Mayyyyybe Donna Tartt's The Goldfinch, if only for one of the early chapters. So well done.

13. Book that had the greatest impact on you in 2013? Probably Surpassing the Love of Men, if only because it led to -- you know what, NO. The Mystery of Edwin Drood is what led to Surpassing the Love of Men, which led to Diana Victrix and Queer Dickens and Passions Between Women, so I'm going with the completely fantastic and unfinished Mystery of Edwin Drood. Oh, how I love it.

14. Book you can’t believe you waited UNTIL 2013 to finally read? I dunno. Visit from the Goon Squad? As with most book bloggers, since I'm pretty constantly reading, I usually don't feel guilty about books I've "put off," because it's not like I was doing other shit. I was just reading something else. I WILL GET TO YOU EVENTUALLY, ALL BOOKS.

15. Favorite Passage/Quote From A Book You Read In 2013?
"Ted deliberated this question while downing three espressos in the hotel lobby, letting the caffeine and vodka greet in his brain like fighting fish." (Visit from the Goon Squad)

Ok, it's not my FAVORITE, but like I'm gonna wade through notes on 62 books. Nice try, survey.

17. Book That Had A Scene In It That Had You Reeling And Dying To Talk To Somebody About It? THAT PART OF FRANCES WILLARD'S JOURNAL WHERE SHE WAS SUPER-GAY ABOUT HER BEST FRIEND OH WAIT THAT WAS ALL OF HER JOURNAL. 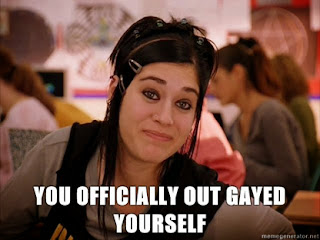 18. Favorite Relationship From A Book You Read In 2013 (be it romantic, friendship, etc). Agghhhhh. Okay. Okay. I can do this. Right. Pick one. Okay. Oh! You know what? Not actually hard. Because Helena/Rosa from Edwin Drood. 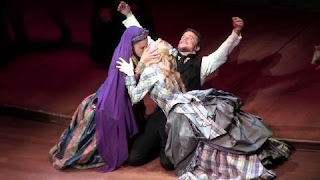 19. Favorite Book You Read in 2013 From An Author You’ve Read Previously:  Toss-up between Truth & Beauty and The Mystery of Edwin Drood. No, you know what? Edwin Drood wins. It wins all the things.

20. Best Book You Read In 2013 That You Read Based SOLELY on a Recommendation From Somebody Else: Tell the Wolves I'm Home. We all have that rule that if three of us recommend a book, we all have to read it, right? Yeah, so three of my cherished fellow bloggers rec'd this and it was obviously great.

21. Genre You Read The Most From in 2013? Lady Books That Have Lesbian Under-or-Overtones. Yep.

22. Newest fictional crush from a book you read in 2013? ANOTHER TOSS-UP, only this time between Helena Landless from Edwin Drood and Enid from Diana Victrix.

24. Most vivid world/imagery in a book you read in 2013? Stealing from Alley and going with Harry Potter even though it was a re-read. But seriously, OBVS this.

25. Book That Was the Most Fun To Read in 2013? The most fun...probably Alice Paul and the Battle for the Ballot, because it talks of suffragettes hiding in dark corners and popping out crying "VOTES FOR WOMEN." And that is the best of all images. Also it's REALLY well done and Mary Walton is the bee's knees. 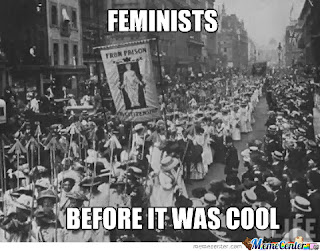 27. Book You Read in 2013 That You Think Got Overlooked This Year Or When It Came Out? The River of No Return by Bee Ridgway. More people need to read it, and then we all need to petition the publisher for a sequel, because MORE TIME TRAVEL AND SEXYTIMES.

29. Bookish Events on your blog in 2013? I hosted a six month long Harry Potter readalong. REMEMBER THAT? REMEMBER HOW IT LASTED SIX MONTHS? Yeah, so that happened. And then I hosted no more in 2013 because six months.

30. One Book You Didn’t Get To In 2013 But Will Be Your Number 1 Priority in 2014? I didn't finish Sue Monk Kidd's The Invention of Wings, but I will do so IMMINENTLY because I'm really, really liking it and it is in my purse right now waiting to be read more.

31. Book You Are Most Anticipating For 2014 (non-debut)? I have no idea what's coming out. That's probably bad, right? I should be aware of things? Oh! Actually, Little, Brown sent me Emma Donoghue's new book Frog Music (coming out April 1st!) and I've been putting off reading it so my thoughts can be fresh, etc etc. But pretty psyched about that because DONOGHUE. And evidently (according to research I just now did), Sarah Waters has a book coming out. So it's just a banner year for all.

32. One Thing You Hope To Accomplish Or Do In Your Reading/Blogging In 2014? Er....review...more books? I've been getting more review requests for books I actually WANT to read, so that's pretty spiffy. If I could actually review them, that would be delightful.