BEA 2014: Makin' It Count By Taking All the Books and Eating With All the People

June 04, 2014
I've wanted to go to Book Expo America since I started blogging. Like Comic Con! For books! Kind of! (not really) I had visions of me zooming around the convention center, eating wisely-packed snack food and stuffing ARCs in my pants.

So this year, I got a press pass. Whaaat. This meant I didn't have to pay monies (which was a dealbreaker as all my money is invested in '90s TV shows right now) and instead got to go and PRESS THINGS.


I got into NYC at midnight Thursday, took a cab to my brother & brother-in-law's in Astoria, and passed out right after eating a sandwich. The next morning I blearily tried to look completely alert and on top of things and also not like a garbage monster. A skirt was worn. It rode up easily. This wasn't the best for my mile walk, but LADY EMPOWERMENT and so forth, so fine, LET my skirt be way too short for 8 AM. I don't feel awkward about it at all.

This situation is why after arriving at BEA, I did not enter for 45 minutes. Because Starbucks + bathroom line. I'm not fixing my skirt in the corner like an animal.

But oh, the sights you see when you enter!


When you go onto the actual show floor, it's similar to most conventions in that it's booths booths booths. I decided to just wander around, because when I'd looked at the BEA Show Planner, I was ridiculously overwhelmed with the number of publishers exhibiting and it seemed better to pick like five booths I knew I wanted to see, and otherwise just walk around and talk to people.

And walk around I did! With a brief stop to get Tony DiTerlizzi to sign my Spiderwick Field Guide, because it is GORGEOUS, and he is the nicest and we should all marry him and his wife. I'll bet they'd be accommodating.

University presses are kind of my favorite, and they had a lot of them grouped together, the most adorable being University of Nebraska. They had ARCs of Dan O'Brien's Wild Idea: Buffalo & Family in a Difficult Land, which is about sustainable buffalo farming (#nebraska), and they were giving this away with buffalo jerky. Four for you, U of N.

The Harvard and Yale booths were right next to each other, so I asked if they were just pranking each other all day, but they MOST DISAPPOINTINGLY were not. Or so they said. I talked with Yale, and when they asked what area of historical non-fiction I was interested in, I basically said "Historical...ladies?" and they had NOTHING IN THEIR CATALOG. Which they tried to say in a way other than "All our books are about men right now." But that's kind of a hard thing to rephrase.


I had one unfortunate experience with someone from a prominent publishing house in the Starbucks line (like 85% my fault), but almost every other experience was fan-tastic. The best thing about BEA -- yes, aside from free books -- is the chance to speak with so many publishers at one time. Normally they feel pretty separated, or like a faceless entity that puts out books. Getting to speak to people who could at least fake enthusiasm for what they were publishing felt invaluable.

There's also a kind of leveling that happens there. No, not everyone's going to have the resources to give away ARCs, but if you have a booth, you can show the books you're publishing, and people can come up and talk to you about them. I talked to some really wonderful small presses. I'm unsure where Thunder Bay falls on the spectrum, but they have an interesting classics series that considers "tactility" (the books are fun to touch): 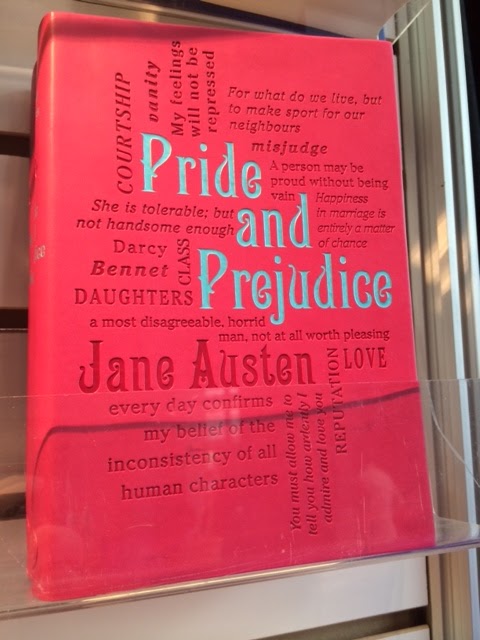 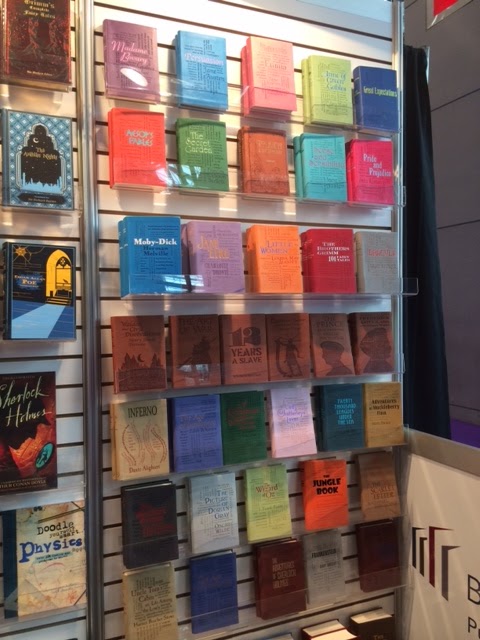 I also talked to someone from the Canadian press Biblioasis while I was desperately searching for a tote bag. EVERYONE HAD TOTE BAGS. So many! So many tote bags! And there I was without evenly distributed book weight, lugging everything in one giant bag, when Biblioasis came to my aid and gave me a damn nice one after I basically collapsed in their booth mumbling "Tooote baaaag."

One of the other benefits of a large book expo is when you deal with people on a face-to-face basis, you can smile really big and be given the new Sarah Waters ARC after you ask the older guy you're talking to who just called you a flower child to sneakily get you a copy 15 minutes early, so THANK YOU, PENGUIN. I am The Most Excited.

I met up with Amanda from Dead White Guys (which she never updates because she is Book Rioting all day every day) and if memory serves, I ate chicken fingers while flailing my arms a lot about the proliferation of male slash fic and relative lack of femmeslash. We also discussed Angelina Jolie. Amanda's one of the first non-YA, non-romance novel bloggers I found back in the day. She gave me proof that there were hilarious, intelligent people doing some book blogging, for which I am obviously grateful. 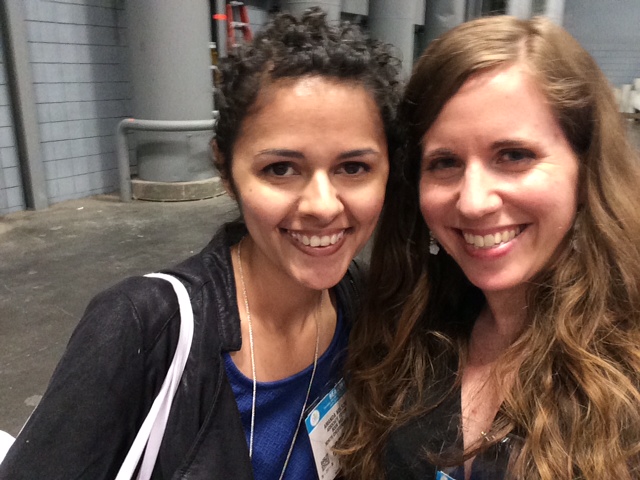 There was more wandering. I scored a Dickens Studies Annual by seriously just going up to the booth, being like "Oh wow, a Dickens Studies Annual!" and they said "Take it. We don't want to carry it home." I got A Plague of Unicorns from HarperCollins after they'd said they would SPECIALLY LAY ONE AWAY for me because I was missing the Thursday signing. Then I showed up to the booth and they were like "Plague of what? That doesn't sound like a real thing." And I said "YES IT IS LIANE SAVED ME ONE." And finally they opened a drawer and boom:

I also had an awesome conversation with Blair at Quirk Books, where we basically said over and over "Quirk's awesome, right?" "So awesome." Quirk is the publisher you can't not like, or if you don't it's kind of "...but why?" I've had nothing but pleasant interactions with them and I just got their Shakespeare's Star Wars series, which I will probably review super-positively because

The bounty hunter we did meet on Ord
Mantell hath chang'd my mind.

Some of you might be aware that Emily from As the Crowe Flies (and Reads) is a bookseller and generally awesome person and someone who was also at BEA. We met last year when I was BEA tailgating (read: getting drinks with people who attended for reals) and I was damned excited to see her again. She introduced me to her husband, who illustrated The Cheshire Cheese Cat, and to its author, Carmen Agra Deedy, who I'm now completely in love with.

Emily and I got dinner at a Sri Lankan place, because we are ADVENTUROUS. My food was postcolonial and wrapped in a banana leaf. She got passion fruit something that looked like it had frog eggs in it. Adventure achieved. But honestly, Emily is a delight and if you get to hang out with her, be glad. She radiates a sort of subtly mocking but also kind energy, which I am so down for. We didn't take a picture together because we are dumb.

And, of course, I finally got to meet up with Meghan from Little, Brown. Meghan is now one of my FAVORITE book people, and not only because she took me to a bar (where we acted like ladies). She seems to really get what it is to represent your publisher, which, of course, is that you're very nice to me and talk about The X-Files. No, but she's great and just look at how much we enjoy each other: 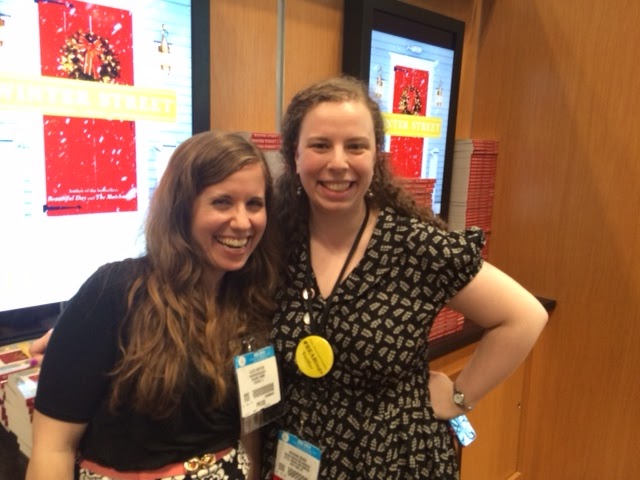 The rest of the time was spent eating with my brother/brother-in-law, meeting up with people (including ALLEY from What Red Read), drinking milkshakes and eating cheese fries. I also made my brother photograph me reading to prove that I kind of did it on the book trip (but not really).


My bags home were completely full. If you go to New York for this and plan on getting a decent number of books, you should probably bring a rolling suitcase. I SOLELY brought shoulder bags, and carrying those around the airport was The Least Fun. Oh, but if you bring one of those rolling suitcases on the BEA floor, I will yell at you, because whyyyyy.

Way to be, BEA. May we all revel in your bookish magnificence til the stars fall and Ben & Jerry's core ice cream flavors become readily available (just kidding, that'll never happen. BEA IS FOREVER).