As with Dewey's Sleepless 24 Hour Readathon, I always make some kind of halfhearted attempt to participate. Halfhearted because my attention span is as that of the highly distractable gnat and I do not think I can do anything for 24 hours in a 2 day period. Also because, y'know, it's summer, and there're usually competing plans.

SUCH AS I WENT WITH MY GF TO STARVED ROCK. Starved Rock is an Illinois state park, and the legend is that a band of American Indians were surrounded by two different tribes, and they made their last stand on a high-reaching rock. Where they then starved to death. And now we hike there and take selfies. The story isn't verified, but it's still depressingly called Starved Rock and we're all kinda like "okey dokey, let's hike."

We stayed in a cabin room, which basically means a little hotel room that was one of three in a cabin, and while there was no mini fridge, there was a heat vent in the bathroom and a frigid air conditioner in the main room, and since I hate being cold and my gf hates being hot, that suited us splendidly. Also nature was right outside our door and I took this pic standing in the doorway: 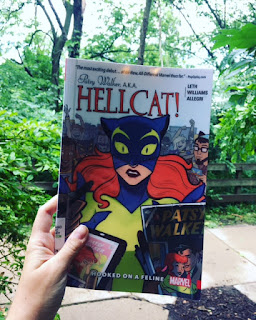 Which brings us to 24in48 again! In between hikes and jaunts to the local town of Utica to check out their county museum and local ice cream shoppe, I managed to get through some of the five books I brought with me in case we suddenly became stranded and I might therefore have gotten bored at some moment (heaven forfend):

I read Hellcat first (and then left it at the cabin when we left, but that is probably not important to this story). It was decent. I don't really know her backstory, so it was more that I recognized her from She-Hulk that I wanted to read it than any kind of historical knowledge of the character. Who I guess was in hell for a couple years? Still unsure. This was mainly about her starting a temp agency.

Then I read My Friend Dahmer. 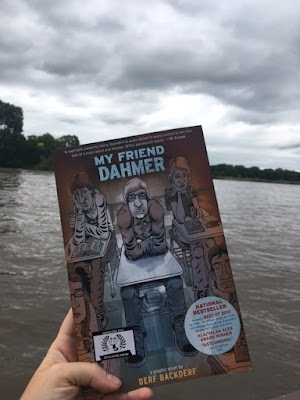 My friend Dahmer is a graphic novel (graphic non-fiction?) written by a high school classmate's of serial killer/possible cannibal Jeffrey Dahmer. In recent years, I've read some accounts that dispute the cannibalism part, but regardless, Dahmer murdered appx 17 people by age 31. My Friend Dahmer, which is a quick read and I got through in an afternoon, is both excellent and an insightful look into the teen years of someone whose later life gets all the attention. 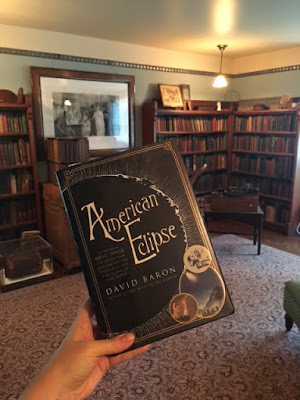 24in48 ended with American Eclipse at the Frances Willard House Museum. Above is her second floor den, which houses most of the books she used while running the first international organization for women. American Eclipse by David Baron focuses on the stories of three groups who are all rushing to catch the 1878 solar eclipse in the American West. A big focus of the book is on Thomas Edison and Maria Mitchell. I thought it was being pretty kind to Edison, but it's been shifting to be more "Yeah, he kind of sucked," so that's great.

Meanwhile, Maria Mitchell is GREAT and discovered a comet in the 1840s and by the 1870s was teaching at Vassar and loving her students, and did you know she taught Elizabeth Cady Stanton's daughter Harriet Stanton Blatch? And Harriet was invited to go on the eclipse expedition, but her parents said no, ostensibly because of money, but Baron speculates it was due to safety concerns.

So! Two books read. One about 1/3 through. Also hiking and ice cream and house museum work. GREAT 24IN48 ALL AROUND.