I think it's a good idea to edit posts and then do new ones every few hours, which is an idea I'm stealing from Ingrid at The Blue Bookcase.

Yeah, sooo...I've been reading Catching Fire on and off, with kiiind of a lot of breaks as my various family members want to do things. But it's such a lovely fall day outside! And there were walks to be taken and leaves to be joyously kicked!

Let's do the Music Bath challenge.

1. What song does the book I’m reading right now remind me of?
I don't have an unclichéd answer. The first thing that came to mind for The Hunger Games was 'Eye of the Tiger' by Survivor.

2. What song does my favorite book remind me of?
Er...well, that's sort of cheating, because there's a musical version of Auntie Mame (cleverly entitled 'Mame'), but it's the song Open a New Window from that that I think best tells what Auntie Mame's all about.


Hour 2.5 (and my first post):
1. Where are you reading from today?
My parents' home in Champaign, Illinois. Land of Corn and a Couple Hours from the Nearest Abraham Lincoln Location

2. Three Random Facts about me...
1) I decided I was going to be an opera singer when I was 13 and have carried on ever since.
2) I hate olives. A lot.
3) Chicago is my favorite despite our shitty weather because it's easy to negotiate as a city, not too crowded, we have decent public transit, a giant lake that looks like an ocean, nice museums and a fantastic library.

3. How many books do you have in your TBR pile for the next 24 hours?
Maybe like eight? It's gonna be good times getting at least one finished.

4. Do you have any goals for the readathon?
Getting two finished! That'd be swell. As my family probably won't permit me to actually read for 24 hours.

5. If you're a veteran readathoner, any advice for people doing this for the first time?
First time doing this. SI SE PUEDE, as they say in the Disney Channel Original Movie Gotta Kick It Up. 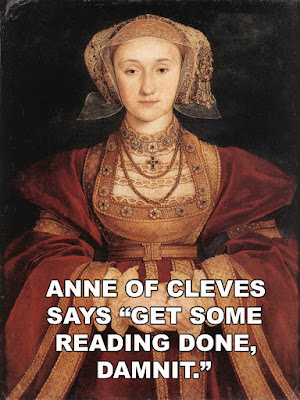