Things of a Semi-Political Nature But Really It's Just Pictures

And then there was the figuring out if the filibuster worked. And that went until 3. And then I had to juice. And then I kind of puttered. And then it was 4 and I went "Ahahahahahaha I am waking up in two hours and they're deciding on DOMA in five." And so then I made this just in case: 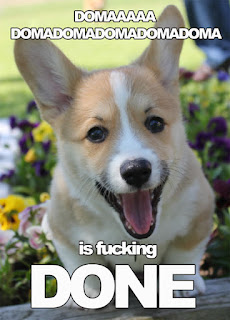 WHICH I GOT TO USE. So things are spiffy, but my bankrupt, end of the marathon brain cannot handle anything right now. So my day has mainly been staring at my computer blankly, answering the phone, and updating my OKCupid profile (THIS SHOULD TURN OUT WELL METHINKS).

There's been too much going on, between the Blackhawks winning, then the Texas thing, my DRY CLEANING PLACE NOT BEING OPEN, and then DOMA/Prop 8. But for serious, I need my dresses. I'm in a wedding this weekend. Why would you close at 6:30 and not 7, that doesn't even make sense.

Days like this, I just want to be a medieval peasant girl named Strudegard whose job it is to keep the damn pigs from tunneling under the fence. "NEIN, SCHWEIN," I would yell. Then I'd make a quilt and have a dalliance with the blacksmith's son before being cruelly jilted for Ingela, who only gets him because her family has two stupid cows instead of one. In conclusion, COWS RUIN EVERYTHING AND NOW ALL I HAVE IS THIS QUILT.