May 26, 2014
Everyone's kind of a tool in their own special way in high school. And later in life you (hopefully) look back and say "Ha, look at how much of a tool I was back then. Thank God I'm only like that in different ways now."

I'm in a weird position, brain-orientation-wise, because I'm a big rule follower, but then I have my "hey fuck the rules, man" part of my brain, which inevitably gets shushed down at least a little by the other part. This was a much bigger battle when I was a conservative Christian, because while I felt like there was something not exactly right about all the things my Christian high school was telling us, I also felt like they were trying to follow the Bible and God, and maybe I should have some humility about this whole process and at age 17 maybe I didn't know better than all my teachers. Maybe.

But I had this other part that kept saying "YOU MUST RAGE AGAINST THE MACHINE, SELF." This primarily manifested itself on my locker.

I had our school rulebook memorized, and one of the many rules was you could not have things on your locker that promoted smoking, drinking, swearing, or generally licentious behavior (paraphrasing here). I had a picture of Gillian Anderson and David Duchovny dancing (!) in my 8th grade locker that I remember tearing down during an impromptu inspection:

Dancing was not allowed. We were basically Footloose but with Christian rock.

Decorating the outside of my locker was a Thing for me. I've basically always been into weird stuff that no one else cares about (stay tuned for my book review of The Pretender novelization!), but I also have constantly felt this unfortunate, Quixote-level need to explain that stuff to everyone around me, feeling like if they get it, they'll love it too.

So I'd put notecard-long opera synopses on my locker, switching them out once a week. I put up "Save [Show No One's Ever Watched or Heard Of]" signs. I remember feeling anxious about a Katharine Hepburn picture because she was smoking, but all the principal said when she passed by was "Oh, I love Katharine Hepburn."

Then when I came back to school for the first day of class, this is what was sticking to my locker: 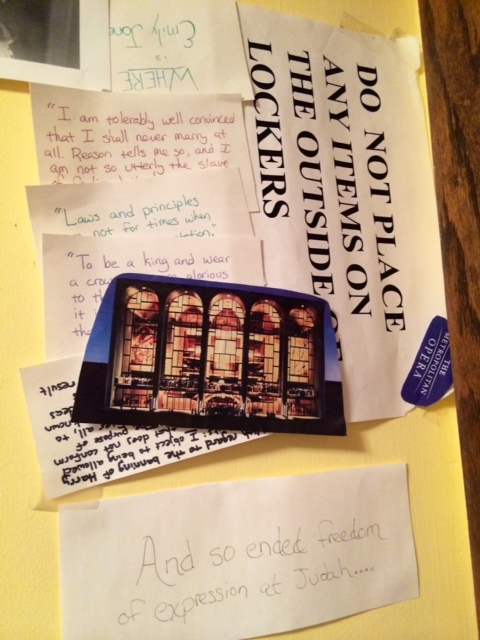 The rules had been changed over the summer, and in an attempt to have the school look more orderly, nothing was allowed to be posted on lockers. Infuriated, I appealed to the principal, but was told that things had "gotten out of hand," and this new rule made things easier. I took the monstrous composite home, made my pretentious sign to go under it, and stuck them on my bedroom wall.

What were the precious words that would enlighten and transform my fellow students? From top to bottom:

1. "WHERE is Emily Jones?" - My high school had a revolving door of terrible English teachers. It got to the point that junior year, my best friend and I made up a teacher named Emily Jones, who would be a mentor, friend, and role model. She would be 27 years old, brilliant, caring, and look just like Marla Schaffel at the 2001 Tony Awards. We got close to writing fanfic. We really wanted Emily Jones.

2. "I am tolerably well convinced that I shall never marry at all. Reason tells me so, and I am not so utterly the slave of feeling but that I can occasionally hear her voice," Charlotte Bronte - I don't even know what was going on here. Maybe a rebellion against the fact that we were constantly being trained for marriage by our teachers. Except for that one parent volunteer who told me God might have intended me for a life of celibacy. Thanks for that, ma'am.

3. "Laws and principles are not for times when there is no temptation." - This is the only quote I memorized from Jane Eyre that wasn't obviously linked to Jane and Mr Rochester doin' it. My rule-loving self was constantly tortured by this quote, as I would set forth rules for myself, break them, read this quote on my door, and then berate myself. Apparently I wanted my classmates to feel awful as well.

4. "To be a king and wear a crown is a thing more glorious to them that see it than it is a pleasure to them that bear it," Queen Elizabeth I - When I was 17, I was obsessed with both Jane Eyre AND Elizabeth I, so I was really fun to be around. If memory serves, most of junior year was spent defending Elizabeth's virginity, which for some reason my classmates decided to doubt. Probably because it drove me into a fury anytime they did it.

5. "With regard to the banning of Harry Potter books: I object to being allowed to read anything that does not conform to my present values. The purpose of reading and education is, after all, to reinforce values that are already known and accepted. To question those ideas is dangerous because it threatens divergent thinking which may result in dissent."

I wrote that. That's just me being a little shit.

Almost everyone is more impassioned as a teenager than they are later in life when they've learned to calm down. Looking at the things we did then and thinking about how we'd do them differently can be a measuring stick for how far we've come as people. I think the main thing I'd tell myself is to 1) Stop worshiping Charlotte Bronte; it's weird. 2) Read some books you disagree with, particularly regarding theology. 3) Ask your classmates what THEY like, and STOP talking about whether or not Queen Elizabeth did or did not have sex 450 years ago.

(for the record, she totally didn't, unless it was after menopause, which is the only argument I'm buying)