September 18, 2015
Have you ever heard of Carola Woerishofer? Of course you haven't. Because as Americans, we hate hard-to-pronounce names. "My name is Carola Woerishof--" "Your name is Katie Samuels, congratulations, welcome to America."

Well, Carola Woerishofer (also 'Woerishoffer') is one of the most awesome people you've never heard of.

I came upon her name years ago while finishing The Triangle Fire by Leon Stein. She's only mentioned in one paragraph, but it interested me enough to read more about her. There's not a lot of readily-available information, but there was a lengthy memorial by muckraker journalist Ida Tarbell. Here's the original paragraph I read in Triangle Fire. The setting is the shirtwaist strike of 1909, when the girls in the factories went on strike for three months. They were beaten in the streets and arrested for no legitimate reason:

Carola Woerishofer, young, wealthy, dark-eyed, and a graduate of Bryn Mawr, did it her own way. She used her money to buy houses. Then she haunted the entrance to the Jefferson Market Court at Sixth Avenue and Tenth Street and whenever another group of arrested strikers was marched before a magistrate, she was with them in front of the bench armed with a deed, ready to slap it down for their release. 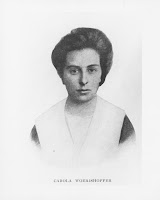 That would have been enough for me, but then I read Ida Tarbell's essay and was stunned. Carola Woerishofer exemplified what Tarbell calls "the Revolt of the Young Rich." After the robber barons, steel tycoons and Wall Street magnates started accumulating their wealth, they had children. Who were, of course, very very rich children. And, possibly because of the socially turbulent and progressive times, they wanted to do something with their money; they wanted to help people and understand classes other than their own. Not all of them, of course, but enough that it became a marked trend.

Her support of the factory girls on strike was possible because when the courts demanded real estate security as a bond for their release, her mother transferred $90,000 of real estate to her (remember, this was 1909) for $1. She said she would remain in the court "as long as the strike lasted."

Carola Woerishofer worked in the steam laundries of New York for four months so she could report the working conditions to the Consumers' League. Four months, in stifling conditions, with no hint given of who she really was.

Tarbell writes of strike funds established, factories inspected, gifts to the needy given (anonymously), and an unshakable sense of what needed to be done, always followed by action.

I wish her life had been longer so that it was possible to see what she would have done during WWI and the Great Depression, but in 1911, at the age of 26, she was driving in bad weather, the car skidded and went down an embankment, and she died of resulting injuries.

I know of very few people who have lived up to the maxim "To whom much is given, much is required," but Carola Woerishofer counts among them.