Dickens's American Notes Summarized So You Never Have to Read It 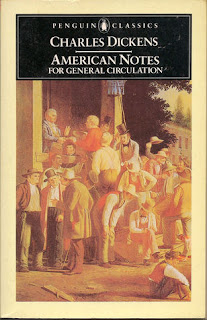 Do not read American Notes. Think of this summary as a service I can provide to humankind so not one more person needs to slog through the 250+ pages of Dickens saying things like "Philadelphia is most bountifully provided with fresh water," or this section, which is one sentence (don't read all of it):

That these visitors, too, whatever their station were not without some refinement of taste and appreciation of intellectual gifts, and gratitude to those men who, by the peaceful exercise of great abilities, shed new charms and associations upon the homes of their countrymen, and elevate their character in other lands, was most earnestly testified by their reception of Washington Irving, my dear friend, who had recently been appointed Minister at the Court of Spain, and who was among them that night, in his new character, for the first and last time before going abroad.

Here are some bullet points:

American Notes was written in 1842, which is when Dickens is a wee 30-year-old who has had some major successes with Pickwick Papers, Oliver Twist, Nicholas Nickleby, and The Old Curiosity Shop. Barnaby Rudge was also there.

This American tour was to make him a ton of money via public readings, and so he could say his little speech about why there should be international copyright laws and American publishers should stop printing/selling his books without giving him money (every American newspaper except one: "boooooooooooooo").

He says nothing about the latter in American Notes; I only know this because his biographer Claire Tomalin mentions it. This makes the rest of the book make a bit more sense, though, as he seems supremely grumpy throughout it.

Dickens travels from Boston through more of Massachusetts, stops in New York, sees Philadelphia, goes to Washington D.C. and Baltimore, thinks about going to the South but decides slavery sucks and he can't handle seeing it more, so he goes to Ohio and Louisville and St Louis, talks about how the famous prairie is a shitty piece of boring scrub, then basically writes a poem about Canada and the utter majesty of Niagara Falls before heading back home.

The writing is both vague and overly descriptive. He complains about Americans almost the entire time. On a steamboat, he pulls the old "I was in no place to judge people, but also here are two pages of judgments about everyone I saw."

I love Dickens. I LOVE Dickens. The author. Not the person. The author creates characters like Mrs Jellyby and Richard Swiveller and Bradley Headstone and Wackford Squeers and Louisa Gradgrind. The author makes me laugh and cry within two pages. The author is so good, I ignore his frequently terrible personal life and intend on reading every single one of his books, the good and the bad. I mean, as obviously shown here with this particularly terrible book.

Dickens the kind of not-great person, not Dickens the author, wrote this book. He cobbled together his notes from the journey and made them into a book, and the book sucks. He says the American prairie is "oppressive in its barren monotony." I'm sorry that one part of Missouri prairie you saw for an hour didn't fulfill your expectations, but you should definitely make that viewing encompass your opinion of The Prairie as a whole.

Right before the final note, he does have a section on slavery. And it's pretty powerful and if you feel like you should read something from it, read that.

At the end of American Notes, Dickens has an addendum that says he visited American 25 years later and it was much better, so never mind. So this entire thing was unnecessary and we've all just wasted part of our lives reading about how tiny steamships were and you had to sleep in tobacco juice. All I can say is Martin Chuzzlewit better be better than this.*