Oh, the second half of Sorceror's Stone. More specifically, wizard chess (so exciting) and TROLL IN THE DUNGEONS. 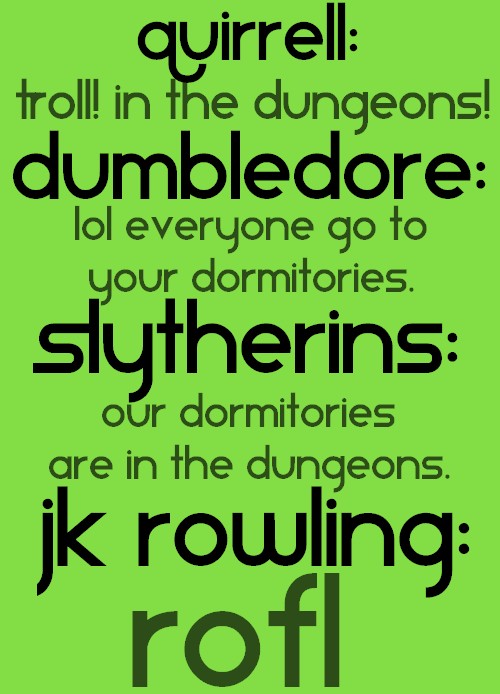 How do we feel about this part? The exposition is pretty much done. They're all friends. There've been things set up for the next six books. Snape! It's like he can read minds. The centaurs! There's a prophecy about Harry and Voldemort. Ron and Hermione! Er....nothing really yet.

I believe something was brought up in comments last week about how Harry meeting Quirrell should have made his scar hurt, but that was solved in the second half of the reading, as Quirrell made it clear that Voldemort was not hidden beneath his turban until after the Gringotts failure. Problems: we solve them.

One of the things I never noticed before because I don't think I had enough distance from the books is how Dumbledore is portrayed here. He's this omnipotent, amazing but still father-like figure. If Dumbledore's there, everything will be okay. You can relax. Place all your trust in him.

As the books go on, this ebbs away, bit by bit. Dumbledore becomes more human, weaker, and far more relatable. For those of us who went through preteen or teen years with these books, it was essentially the journey we had with our parents. "Wait, you're just PEOPLE? People I love, but still flawed, human people?" There's a sense of betrayal, but you get over it and you learn to love them for being people who loved you from your whiny baby years through your gross adolescent years to your awesome current years.

Speaking of people I love:


I miss this Ron a bit as the series goes on. This is one of my favorite moments for him. He comes back at random times throughout the other books, but rarely in as clear a way as he does here. Stupid Harry, taking up the space in his own books.

Finally, really, J.K? Death is but the next great adventure?

I'll accept that as a Peter Pan nod, but still. You watch yourself, madam.