The Looking Glass Wars, or Hey I Finished a Book in Seven Years

January 21, 2013
January's been the complete opposite of November and December, in that I am actually READING things. How very odd indeed.

So a book I'm actually proud of finishing is one I got through last night: The Looking Glass Wars.

When your mother names you Alice and brings you up with a wardrobe painted with scenes from Alice in Wonderland and a collection of copies of the book, you feel a sort of reluctant obligation to read things about that character. So when I saw this at Borders back in 2006, I thought what the hey. And then I didn't read it for seven years.

Which is a shame, because I mean, the cover's cool, right? And the title seems to imply it's Alice in Wonderland, but maybe dystopiafied, and who doesn't love that.

In the middle of reading it, I would've said not to read it. My current thinking is that if you can read it in like a day, do it. I did it over the weekend, and it was fun enough that I'm still thinking about some of the characters. Also I have to read the second one, damnit, because ALYSS AND DODGE.

Right. Her name. So basically Alice Liddell is actually Princess Alyss of Wonderland, and Queen Redd takes over the queendom, killing Alyss's family and forcing her to flee through the Pool of Tears to Victorian England where she is adopted by the Liddells and told Wonderland didn't exist. Meanwhile a hardy band of insurgents who call themselves Alyssians are fighting against Redd and her top assassin, The Cat (yes, that cat -- no, not Dinah).

Alyss also grew up with a boy named Dodge, whom I was rather determined not to like, but then something tragic happens during Redd's takeover and he becomes this:


A burning dormitory illuminated the renegade's face: handsome and rugged, with four parallel scars visible on his right cheek. Dodge Anders. Only fourteen years old but fighting like a grown man. 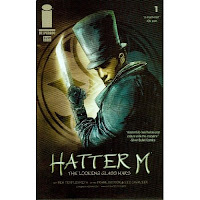 SCARS. Sorry. I like scars. Also he's an unemotional badass with REPRESSED PAIN and that is awesome. There's another guy like that named Hatter Madigan (get it?) who's basically the head of Alice's bodyguards. He has a lot of knives.

ANYWHO, so Alyss at some point makes it back to Wonderland, where she has to hopefully claim her rightful place as queen and maybe MAYBE in future books make out with Dodge's face. That's my dream for those two crazy kids anyway.

The random and minor thing that bothered me about this book isn't so much the not-totally-amazing-but-still-trying-hard prose (it's fine), but more that on the cover, the Card soldiers totally look like the battle droids in Phantom Menace.


But this is obviously minor.

If you look up Frank Beddor, he either looks like a magician or a 1993 movie villain. So I don't know how I feel about that. He wrote two other books for this series, plus there's a Hatter Madigan graphic novel spinoff, and that's doable. I'd read those. If you're all into Alice in Wonderland stuff, then maybe give it a whirl.

ALSO, what I learned while doing side research in the course of reading this book is that Alice Liddell met Peter Llewelyn Davies in 1932. So. Alice in Wonderland and Peter Pan. That is the best classic children's lit crossover of all crossovers. I think Alice would be irritated with Peter if it came down to it, but still.