In Which the Heroine Discovers Awesome Things

August 06, 2011
Yeah, I'm the heroine here. Because it's my blog, damnit. And I'm 5'2" and spunky, which we all know is perfect heroine material.
Anyway, this weekend has been surprisingly awesome so far. And I'm going to tell you all about some pretty great things that you should be aware of in order to lead a happier, more fulfilled life.
1. Tig Notaro is hilarious. Like...you don't even know. Unless you've heard her new standup album, in which case right now you're shouting "OMG I KNOW. I KNOW. AMAZING." It was rec'd on twitter, and I clicked on it right before bed, being like 'Eh, sure, I'll check this out.' Look, just go here. It's an mp3 of one of the tracks. You will laugh and then be a happier person.
2. The Sarah Silverman Program is on Netflix Instant, and — hey! HEY. I saw that dismissive look. No. You watch it and you laugh. I've spent the parts of my Saturday that weren't spent trudging around Chicago eating ice cream watching that. That might've been a confusing sentence, but hopefully you stuck with it.
3. Cheap books! Omg cheap books! Right, this is a book blog, so this post has something to do with those. I stick to my subject, damnit. No one say otherwise or I will point to this as evidence. Ok, so Open Books, which I've pimped out before, is the best bookstore in Chicago. If you're here, and kind of meandering around and like 'Oh, hm, I could really use some cheap, awesome books,' GO TO CHICAGO AND FRANKLIN. It's off the Brown Line. And it's GREAT. And their proceeds go to literacy programs. And yes, Chicago has a street named 'Chicago.' I get that that could be confusing.
The book part of this post is actually a bit longer than a paragraph, which is as it should be. Since I've been watching Hoarders, I've been trying to get rid of the things I've accumulated. Or at least a couple of them. I've been hoarding books. I admit to it. So I had like 15 to take to Open Books, as all their books are donated. I woke up at 7:30 this morning, and despite not having a voice lesson until noon, convinced myself I didn't have time to get to Open Books and back.
I'd basically decided not to go, when my friend Julie posted on twitter with "Really tempted to go to Open Books today. Must resist."
FATE. Great, giant, squishy fate! So off we went, post-voice lesson, and I dropped off my massive quantity of books and then bought three more. BUT the three more cost $6.50 total. My gosh, I love Open Books. 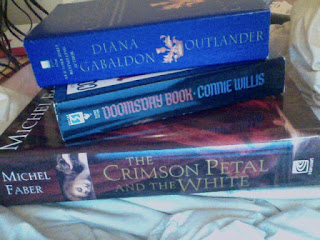 That's Outlander (greatly beloved by Sarah at Sarah Says), Doomsday Book by Connie Willis, and The Crimson Petal and the White, which was ONE DOLLAR. When they get multiple copies of things, they put the extras on the dollar shelf. AGH I LOVE THAT STORE SO.
Julie picked up two Lord Peter Wimsey mysteries, and Possession, which everyone should read and love. And then we walked to Old Town and got ice cream. Chicago in the summer is not nearly as sucky as I make it out to be on twitter.
Oh yeah, and I started The Crimson Petal and it's amazing and wonderful and I think I would marry it I weren't living in an obviously unenlightened society. It's like, hey, I'm an American, not a Soviet! I have rights, Mr. Rules Man! Maybe someday we'll get there. Someday.