Moby Dick: This Book Seems to Be Somewhat Lengthy

August 02, 2011
The Field Museum -- our natural history museum here in Chicago -- has a special exhibit about whales. My friend and I went last Saturday and mainly made fun of whales, because we are part of a cold and unfeeling generation (I did, however, cry during the last episode of Hoarders I watched), but it was interesting enough to make me go 'Hm. Maybe I should look at Moby Dick. Sperm whales look pretty badass.'
I have been warned off Moby Dick for years. "Read Bartleby! Moby Dick's not that important to read,' cried my professors. And I fully believe that's true. But one of my brothers has read it, and he won't stop lording it over me (WHILE saying how horrible a read it was; thanks, Rodney), so I have to at least try it.
It has been noted many times previously how similar the attempt to finish Moby Dick is to Captain Ahab's obsessive hunt for the white whale. Will Ahab finally catch it? Will I finish this book? I know the answer to one of those questions.
Melville seems like a stand-up guy. He also writes some crazy-long sentences. Check this one out:
Though I cannot tell why it was exactly that those stage managers, the Fates, put me down for this shabby part of a whaling voyage, when others were set down for magnificent parts in high tragedies, and short and easy parts in genteel comedies, and jolly parts in farces—though I cannot tell why this was exactly; yet, now that I recall all the circumstances, I think I can see a little into the springs and motives which being cunningly presented to me under various disguises, induced me to set about performing the part I did, besides cajoling me into the delusion that it was a choice resulting from my own unbiased freewill and discriminating judgment.
﻿Yeah. That's one sentence. And the thing is, I kind of enjoy long, meandering sentences because it shows how well one knows the language. If you're just starting French, you can say something like "J'aime le futbol." Which is great. But once you've taken years of it, you can have a sentence with commas and asides and everything. Ah, language. You are swell.
I am also reading The Princess Diaries. I have decided to compare the two. Here is my first comparison chart: 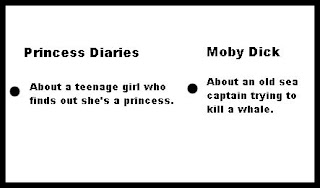