Top 10 Underrated Books (According to Moi) 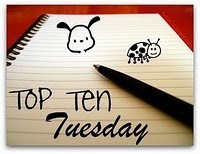 There is a difficulty with this particular Top Ten Tuesday, which is that I tend to love books everyone else loves. This is a continual source of frustration for me, as I am a unique and delicate snowflake that cannot be like everyone else, and yet I keep being presented with evidence to the contrary. So excuse me while I scour the depths of my 'read' section on Goodreads...
1. The New York Regional Mormon Singles Halloween Dance - Of course. I'm still WAY into this book months after having read it. My mom was in the hospital a month or so back, and when she came home, she'd lay in bed and I would read her chapters from this to keep her entertained. It's hilarious and insightful and well-meaning and I super-love it.
2. Kissing the Witch: Old Tales in New Skins - Emma Donoghue! They're like short stories, but not quite. They all link up to each other. She knows her fairytale shit, let me tell you. Because you can only mess with something effectively when you know it really well, and she takes old fairytales and reworks them in a non-stupid way. I love Emma Donoghue.
3. How I Became a Famous Novelist - I've mentioned this before. I love everything Steve Hely writes. So in this, a guy's ex-girlfriend's getting married, and in order not to look lame at her wedding, he decides to write a bestselling novel. Steve Hely makes fun of almost every popular literary genre. It's great.
4. I Know I Am, But What Are You? - Samantha Bee wrote a book and you should read it! Yes, I'm way into comedic essay collections and recommend a few of them. BUT you should know that I thusly have some kind of discernment. Would I recommend I Was Told There'd Be Cake to you all? No, I would not. Because I respect you, and that collection's just not that good. But this one's awesome.
5. Auntie Mame - It's not really underrated. Lots of people know it's great. But it's my favorite book of ever, and it should be on every list. Except for, like, Books That Suck a Lot. Because it does NOT.
6. Gaudy Night - There's a detective series from the '20s and '30s. It's called the Lord Peter Wimsey series, and it's by Dorothy L. Sayers, who was buds with C.S. Lewis and some of the other Inklings. Anyway, there's an English lord, and he solves mysteries while being witty. If that sounds AT ALL appealing, you should read the whole series, although it starts off not-so-amazing and gets really, really good by Unnatural Death. All I'm sayin' is I never read detective fiction, but I love it. And Gaudy Night is the best one, and all about Harriet Vane, Oxford-educated detective writer and love interest of Lord Peter.
7. Sideways Stories from Wayside School - This was popular when I was like 10, but I fear it's falling into obscurity. No! This must not happen! The Wayside School series is fantastic and must endure!
8. Fingersmith - If you're at all into lgbt lit, you've probably read Sarah Waters's hugely popular Tipping the Velvet. I'm tempted to put that on here, but if you're at all squeamish about ladies doin' things to other ladies, it's best to stay away from it. Fingersmith also has an lgbt slant, but it's mainly a good Victorian era novel about thieves and madhouses. And I LITERALLY dropped my jaw at least twice.
9. Invitation to a Beheading - I took a Nabokov course in college where we read eight of his books. EIGHT. I didn't even really like him; I just liked the professor. Anyway. He's okay. This book is amazing, though, because you have to put away all rational thought while reading it. No trying to figure out where the story's going, because it's completely abstract and random and insane. The semester I read it was a particularly exhausting one, and I remember staring in frustration at a page, trying to read it literally. It didn't help that I was also taking a Dickens course that semester. Whatevs, it should be read. Also Pale Fire and Pnin.
That's it. I ran out. Not foisting on you some okay book that I falsely call underrated. But the others should pretty much be read by everyone. Because they are all awesome.