Desert Hearts, You Were Not What I Was Expecting

July 19, 2012
I NEVER get to write blog posts at home, as home is where I practice piano and singing and watch South Park and eat hummus. Work is where I wait for the phone to ring and stuff envelopes (I AM THE BACKBONE OF MY COMPANY). But here I have access to a whole other array of gifs. SO EXCITING. So although this shall be published while I am at work, it is written in the midst of a thunderstorm, as I wear an oversized t-shirt with multiple superheroes on it and pirate boxer shorts, both of which I fear would be deemed unsuitable work attire (a tragic loss for the company).
This week I am basically only super-focusing on Telegraph Avenue and Love Medicine by Louise Erdrich (summary thus far: Native Americans are people too), so I have little to say on the subject of books, BUT I just watched the film Desert Hearts (based on Desert of the Heart by Jane Rule), which I, for about a year, mistakenly assumed was about a transvestite man getting stuck in the desert. I'm sorry, but from far away, this woman in the hat looks kind of like a man: 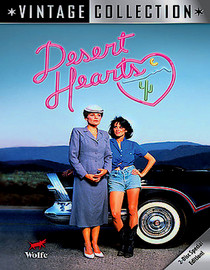 Nope! Turns out it's a lady, AND it's a really famous movie AND it's about ladies in Nevada in the '50s-but-with-'80s-hair fallin' in lurve (that's the spelling, right?). Speaking of which — kind of — if you haven't heard the song 80's Ladies by K.T. Oslin, you my friend are in for a TREAT. I've listened to it like four times while writing this. So special.

So, movie plot:  This 35-year-old English prof. from Columbia (go on...) is in Nevada in the '50s to get a divorce because she is dissatisfied with her life and wants to figure out how to fix it. For it is stagnant. And she is Missing Something (guess what that is? hint: it doesn't rhyme with 'a pan').

What was that? Why of COURSE she meets a wild and free-spirited young lesbian who causes her to slowly come out of her repressed shell and embrace life.

It's actually not as douchey as it sounds. But it is a little bit, because the young, out lesbian who helps the scared, closeted, older lesbian kind of seems like a cliché now, so there was some eye-rolling on my part when I saw this was the direction it was taking.

Something that was kind of refreshing was that the younger girl is pretty damn "out" for the '50s, so there was no agonizingly annoying scene where the family tries to deal with the revelation of her gayness. Seen it before, it's been done too much, don't want it, thank you.

Ok, so Closeted Lady Professor slowly embraces this heady Nevada life, which apparently consists of going to bars, listening to country music, and wearing Hank Williams shirts. And slooooowly realizing she's into Young Out Free-Like-the-Wind Girl. But also denying it, because who needs that shit to deal with?

Closeted Lady Professor: "I think I might be into this 25-year-old girl."
The 1950s: "Oh, well, you know, it's your life and who are we to make it harder to live it, y'know?...ahahahaha Omg TOTALLY j/king. Totally. But seriously, no, we're gonna make you hate yourself."

I was kind of confused while watching, because it was rated R, and it didn't seem worth that. So I was all up in arms (while lying down, eating a Magnum Double Chocolate ice cream bar) about how the ratings people in the '80s sucked and gave a movie with ladies kissing an R rating, and that's ridiculous and — oh there're boobs. But no! Boobs are in PG-13 movies and — oh. Other stuff. Never mind.

So the sex scene is kind of way more graphic than I was expecting, and all I could think during it was how AWKWARD that would've been to film, because the camera's just right up in there, and if I were one of the actors I'd probably keep cracking terrible jokes or just randomly start giggling and ruin every take.

But they have Things to Work Out, and there's a dramatic scene involving a boozy stepmother and the younger girl being all "YOU'RE RUINING MY LIFE" and stomping around. Leading into the ending, which was actually great. Really, really great. As in well-done. Because OH HOW EASILY ONE CAN TREAD INTO SACCHARINE AND HORRIBLE. But IMO they did not do this.

Anyway. Watch this movie. It is Pop Culturally Important, and there're lots of pretty shots of Nevada mountains. I was looking for a gif from it, but all the ones available seem to be the two ladies making out in various states of undress. Which is a really small percentage of the film, but I guess that scene where they were walking in a field somehow wasn't as compelling to gif. So this can play me out: