I haven't listened to any Toby Keith today, and that, my friends, is a miracle

July 04, 2012
Not going to bed yet. For reasons. So here's something I've dredged up because Netflix just recommended yet another terrible lesbian movie to me, and look, I get that it's an underfunded genre and maybe the people with the most to say are just terrible at saying it, but THAT IS NO EXCUSE FOR THIS SORT OF THING.
There's a movie called I Can't Think Straight (GET IT?) about these two girls and they meet, get all interested in each other, and then ZING revelations/family issues/empowerment for all. In terms of the genre, it's ACTUALLY not terrible. Which is why I own it. But the scene where the sister of one of the girls realizes said sister is gay is maybe the worst thing ever. She's in her sister's room and has this ah-ha moment prompted by various books and CDs that are innocuously piled up/displayed.
Really? Really.
But it also has this: 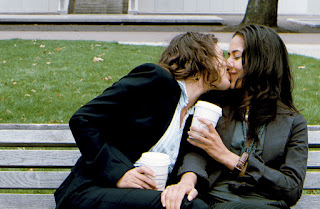 And that's damn cute. So you win, terribly-written movie.