Legend of the Seeker: A Bunch of Hot People Having Exciting Adventures That Involve Magic

July 31, 2012
I published my readalong post before midnight SO I GET TO POST AGAIN TODAY. Such are the rules. Also I've sucked at posting lately and tomorrow's Moonstone Day (did you all see my addendum about researching the Siege of Seringapatam? very good). Sooo today's gonna be about Legend of the Seeker. Said post is inspired by Meg's most recent post, and if you're not following Meg, WHAT ARE YOU DOING GET ON THAT. So. Legend of the Seeker is based on a terrible series of books by Terry Goodkind. I mean, I picked up the series thinking "All right, this probably isn't going to be very good," and it was WORSE THAN MY LOW EXPECTATIONS.

However. A tv series was made and aired a few years ago on ABC and I watched the first few episodes and went ZOMG THIS IS THE BEST BUT ALSO THE WORST BUT ALSO THE BEST.

Basically, Legend of the Seeker is the prettiest. The writing's cliché, the acting's so-so, and its special effects are those of fair to middling sci-fi/fantasy, BUT. The Pretty cannot be ignored.

And the clichés are kind of comforting. Like in the pilot, one of the characters not only says "Who are you to decide a man's destiny?", but also "Prophecy be damned!" So you can predict most of what people are going to say (ex: when the hero tries to interfere and save the girl in the pilot, the villain says something along the lines of "Get out of my way, boy!"), so you don't have to focus on things like "the script", but can just sort of stare.

And the central character is this young guy who didn't know he was totally special and awesome, but one day gets told he IS, and he has to save the world, and it's basically Harry Potter, Darkness Is Rising and Everything Else Ever.

But I really, really don't care. Because I just look at the two leads, giggle kind of stupidly and say "YOU'RE SO PRETTY." (by the way, the pilot really does kind of suck, but the show swiftly improves, so POWER THROUGH and get to prettiness and Hitherto Unknown Levels of Unresolved Sexual Tension) 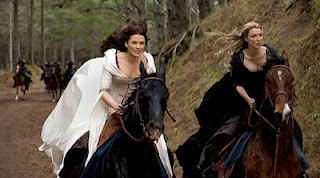 So the pilot opens, and you see galloping horses. Not surprising for a medieval-type show. Then there are pretty dresses. *ears perk up* Then there's long hair, bows and arrows and the heroine it turns out is like 5'10. Oh hi BEST SHOW EVER.


That is the SECOND SCENE. I applaud the people at ABC for not trying to make "art" or "say something", but instead giving us a horse chase involving kickass women, followed by a hot guy chopping wood. I am so on board with this show that I have my name carved over a bunk below decks.


So Richard (Hot Guy) is super-special, and his protector is Hot Girl (Kahlan -- "Kay-len") who's the lady in white above, and because they're both MEGA-HOT but they can't be together because of MAGIC, there's awesome tension ALL THE TIME, and also there's this old wizard guy who travels with him and continually prevents them from having sexytimes even though they both REALLY want to because they're both soooo attractive.

It's on Netflix Instant. It's only two seasons. It was filmed in New Zealand, so in addition to its pretty, pretty people it has gorgeous background shots. Oh yeah, and this kind of thing happens all the time, because ABC just doesn't even try to mask what this show's about:

Oh yeah, also DARKEN RAHL. Also the Mord Sith. I have not even SCRATCHED. THE SURFACE. So much greatness. Watch this. Then we'll all chat about how amazing Kahlan's hair is. Yes. Excellent.