The Moonstone: It. Begins.

August 01, 2012
CAN YOU FEEL THE EXCITEMENT?
Another Wilkie readalong has begun. Ah, hearken back to the days of yore (April), those of you who participated in the Woman in White readalong, and think on how little we knew. HOW PITIABLY LITTLE. And now we return, a little older, a little more imbued with the respect for Wilkie that he deserves. And with some new people joining us! Oh, how thrilling. 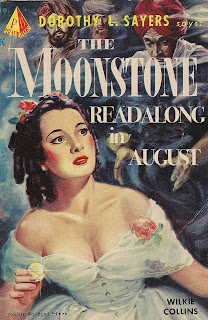 To those of you who haven't done this before, link your post up in the Linky (I know, it's complicated) and try to visit at least some of the readalong participants, because WITHOUT DISCUSSION, THERE IS NO READALONG.
Like an idiot, I didn't assign the prologue. It's like four pages. And AWESOME. You know that guy who narrates the Mummy movies? Ardeth? The member of the Medjai? And he's all mysterious and full of gravitas? That's how I hear the prologue. It's The Mummy Returns of the 19th century. Also — ALSO he uses a device that was used in things like The Fifth Element and OMG I hope he was the first to use it, because Wilkie, you are so clever and awesome and let me smoosh your face.
So I asked you all to look up the Siege of Seringapatam, which I assume some of you did — BEGRUDGINGLY, if your comments were any indication — and so you all know that in 1799, the English went into southern India and killed the ruler there, mainly so they could maintain control of the region. 50,000 people against 30,000, so this wasn't a tiny siege. There was a lot going on in India at the time, what with Napoleon trying to take "British" assets there and all sorts of battles happening, and Lord Nelson being in the middle of things and then getting statues made of him. It seems to have sucked to actually BE Indian during this whole Indian conflict, and while the book's not about that (I don't think), it should probs be noted. Boo the British. Boo the French. But huzzah for Wilkie, who is not pro-killing people.
The first huge section is all this one guy's POV, so next week when we meet, we shall discuss him and whether we like him or not and if any kickass ladies even REMOTELY resembling Marian have appeared and how much we all love Wilkie even if his BFF was Dickens, because sometimes people are lovely but their friends are terrible and what can I say it's a mystery we might never figure it out.

p.s. I ignored my own advice and didn't give background info on me, so HEY, I'm Alice. I like opera and cryptozoology and ladies wearing bustles.