Book hoarding is the new...something.

November 29, 2012
I just had a moment of panic for my desk/vanity. I've had this large, cumbersome piece of furniture since I was a teenager and wanted to decorate my room in the style of the 1940s (yeah, I was one of those cool kids who did that sort of thing). So I begged my parents for this desk, which we saw at an antique store, and they bought it for me, and I carted it off to Chicago when I moved up here. But my room is appx 8 x 9, and in that I have my tiny bed, a keyboard and its stand, a floor lamp, and my giant desk/chair.

So for Christmas I requested a much lighter desk. My dad informed me today they got it, and I have to pick it up downtown. Which means I have to get rid of my giant heavy wooden desk, which is causing me anxiety because the PICTURES shoved in the mirror during high school, and the endless packs of hair ties in its drawers (those I'm probably less attached to, but still). What's going to happen to it after it leaves my apartment? MEMORIES.


I'm a low-level hoarder, meaning I hate getting rid of almost anything (what if you NEED it later), but I'm not in danger of being crushed by my own belongings, plus I guarantee there are no dead cats in my apartment. Aside from the desk, this is also why I brought things like Sideways Stories from Wayside School to Chicago, despite having a billion other books I need to read, and not being nine-years-old.

I've had John Adams by David McCullough on my shelf for eleven years. John Adams is the guy I had a picture of in my high school locker (ok, it was William Daniels playing John Adams in the musical 1776, but whatever). Since purchasing this book and never finishing it, I have watched multiple miniseries about the man, traveled to his hometown of Quincy (pronounced 'Quinzy'), Massachusetts, and done the following with a cardboard cutout of him about fifteen feet from where he and his wife Abigail are buried (the basement of a Unitarian church): 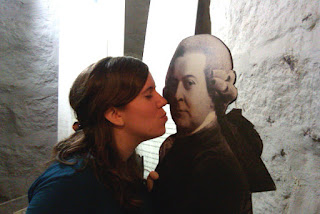 But I still haven't finished that damn book. Maybe I never will. But I'm never getting rid of it. Because there is always the HOPE that I will finish it.

I'm not positive what's behind book hoarding. Libraries exist. I use them frequently. They are free. But then you have to cotton to their schedule and can't just own a book and look at it fondly as you go to work and not actually open it for four years. I'm trying to cut my books down to sentimental copies (lookin' at you, shitty Bantam edition of Jane Eyre) and awesome/pretty editions of things. Like Intestinal Ills, printed in 1919? I'm not lettin' that go. There's a chapter about the origin and use of the enema. That book will be cherished.

The Harry Potter Readalong info post is coming. Oh, it's coming. You all better be collecting GIFs, because they will be NEEDED. I'm not reacting to fricking "Nice to be with friends" without approximately fifty crying GIFs.