Another Review! Wherein We Discover Why I Don't Get Paid for This 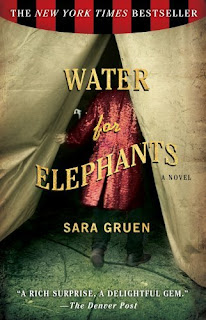 Water for Elephants
Ok, so I started loving this more than basically anything else, but at about the halfway point my rating went down from 5/5 to 4/5 because:

1. Jacob is emo ALL THE TIME. It was the Great Depression, but it was also the time of the musical 42nd Street, which features songs like 'Young and Healthy.' Which he is. But he's always enraged or crying or being smacked around by someone, which causes him to get mad and cry some more.

2. Variations on a theme: IT IS SO DEPRESSING. Like, even ignoring EmoJacob, it reminds me of short stories I wrote in middle school after my English teacher told the class that happy endings were "unrealistic," so at the end of all my stories, everyone was dead.

But the first half is amazingly awesome. I also could've done with some more in-depth stuff about Marlena, but the book IS from Jacob's perspective, and I liked it even without a super-present female character, so it pretty much has to be good in that case. 'Cause I don't like me the books without the strong female character. Except the long opening of East of Eden before Cathy shows up, because that book's fricking poetry in prose.
I'm totally gonna enjoy that monkey book.