Top Ten Tuesday: Rewind Edition, aka Alice Gets to Choose from Past Topics

April 19, 2011
So of course I picked Favorite Fictional Couples. There're probably spoilers in here. But whatever, I don't think they're a big deal in this case.


Will Ladislaw/Dorothea Brooke - Middlemarch
I was 19 when I read this and basically freaked out about Will and Dorothea. Why? Because Dorothea’s the most admirable character ever (I mean, you could say that like Beth in Little Women is, but Dorothea’s not a milksop) and you think she’s all impenetrable, but then she loves him and it is sooooooo wonderful. Reading this bolstered my conviction that, if alive today, George Eliot would do things like write West Wing fanfic. Only she wouldn’t ship Josh/Donna, because she’d know they’re not equals. JOSH/AMY FOREVER.
Ethan Frome/Mattie Silver - Ethan Frome
DOOMED ROMANCE. I’ve heard people make fun of this book, and they suck. It is amazing and cathartic and kickass. Ethan and Mattie are awesome for trying to do the right thing.
Nan King/Florence Banner - Tipping the Velvet
I didn’t think I’d like Flo. But then it turned out she’s all into the labor movement and makes Nan a better person, whereas Kitty’s just an energy sucker. A really hot energy sucker, but an energy sucker nonetheless. And whatever, people who only ship Nan/Kitty, Nan and Flo make out in a closet. That was the height of sexuality to my 14-year-old imagination, which I will now revert to for the purposes of this post (erm, not that I was 14 when I read Tipping the Velvet).
Peter Wimsey/Harriet Vane - Peter Wimsey series
Best ship ever. Hands down. They’re smart, they’re funny, they’re brave, they’re not hot 20somethings, they’re independent, and they love Bunter the manservant. If I had to give up all ships but one, I would keep Peter/Harriet, even if Dorothy L. Sayers refused to write scenes of unbridled sexual tension and instead chose to mock the reader for wanting them. I can just see her now, staring down at her manuscipt, sniggering behind her hand. But damnit, I still love the woman.
Percy Jackson/Annabeth Chase - Percy Jackson series
I suppose I should be ashamed of this. I teach at a Sunday school type thing at my church for the older kids about once a month, and we wrap up each session talking about Percy Jackson and Harry Potter. I know most people forgive Harry Potter, but I will stubbornly cling to/defend Percy Jackson. And while I normally shrink from shipping teenagers (or people under 35), Percy and Annabeth become really good friends and you get to see their relationship evolve until they’re an acceptable age (which is like 17? I guess?). And she’s a daughter of Athena and full of wisdom and whatnot, whereas he’s a son of Poseidon and…like…good with water. So that pairing makes sense.
Adam Bede/Dinah Morris - Adam Bede
Okay, George Eliot is, again, Queen of 19th Century Fanfic. The main problem I had with Adam Bede is that Dinah disappears for a huge portion of it and it instead focuses on Hetty the Harlot. Who teaches us all a little something about not having sex with the upper class. But Georgey (as I call her in my head) pulls through in true fanfic style, which makes me love her.
Sir Leicester/Lady Dedlock - Bleak House
THE DEDLOCKS WILL BE HAPPY. I have a picture I’m totally sharing, because it’s adorable. 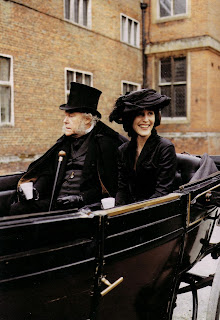 I mean, this is absolutely not indicative of their relationship in the book, but WHATEVS
Alfred/Sophronia Lammle - Our Mutual Friend
I'm almost positive Dickens doesn't want these two shipped, but I'm doing it anyway. They're minor characters in a book that causes great anger to rise in me when discussing it for too long, but I like them. Did I ever think they'd make my top ten list of booky couples? Not until now.
﻿

I read the Anne series when I was 13. Anne and Gilbert are awesome and I shall brook no opposition (although really, who’s gonna be like ‘Anne and Gilbert SUCK, as do you’? although I might find it funny if they did).
----------
Most of my shipping happened in my teens, and during that time I mainly read Victorian lit. So these’re almost all from that time period. The few “romantic” books I’ve read that were written lately (ex: The Time Traveler’s Wife) have been shit. Listen well, all ye.