April 20, 2011
I just looked up "thunder bible" in google image search, looking for...I don't know, some kind of picture of God with impressive looking storm stuff around him, but instead I got this picture of Zeus, so that's what you're getting: 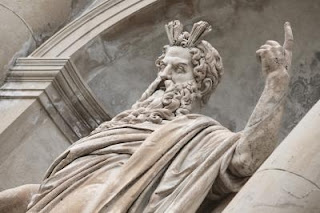 I'm an iconoclast, but I'm not one of those nasty iconoclasts who breaks into your 14th century home with a mallet and starts smashing up all your lovely pictures of the Virgin Mary. I am just personally not into having images of God around. Except obviously in blog posts. 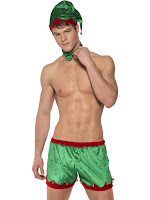 I had a purpose to this post, but got distracted by Zeus's weird, kind of elfin headpiece. And I mean a real elfin headpiece, not the kind this dude over to the right's wearing. Because that's just for silly Christmas elves, not badass Tolkien ones.

So I'm trying to read through the Bible in a year. Other people have done it, so why can't I? Turns out because other people obviously had a longer attention span and a greater endurance for Exodus, Leviticus, Numbers and Deuteronomy. The first time I tried this, I made it to the first chapters of Exodus (the second out of 66 books in the Bible, for any pagans out there) and then gave up. This time, I was determined to make it through. It is, however, now April and I am on the 5th book of the Bible. Dividing it up purely by books and not total number of chapters, by 1/3 of the way through the year, I should now be reading Song of Songs, aka The Sexy Book. But instead I'm reading about why the Israelites need to give stuff to the Levites and when it's proper to stone people.

For a modern day Christian, the Old Testament's really discouraging. God seems almost unrecognizable compared to what some call "the God of the New Testament," and it's really, really, really difficult to understand why the Israelites are being commanded to do things like stone the people in the community who start to worship others gods in order to "purge the evil from among you." Maybe our generation has just heard way too many dictators talking about purging and cleansing, which just amounts to heaps of dead men, women and children. But I feel like it's probably a good thing to be uncomfortable with people using blunt force trauma to kill others, right? Or really any means, come to think of it.

As a Christian, you tend to give the benefit of the doubt to God. I mean, He's God. I think I do this, but when you read these 4000 year old documents, translated by some 20th century Christian guys (I read the Right and Proper NIV translation and shall read no other, no matter how accurate it is), with little-to-no historical or cultural background or context as to what was going on around the Israelites at the time, it can just look awful.

The essence of this is: it's really hard to read the Old Testament and not feel all squirmy inside when reading about what was considered holy and right. But 1) I don't think it matters much anymore, and 2) There's probably no way I can ever really understand it. Which I'm okay with. But understand it or not, I'm gonna read all of it. And then I'll be able to check it off on that obnoxious showoff list of How Many Books You've Read. Which is second on my list of benefits from it right after Spiritual Edification.