People I Think Are Cool, PLUS, I Suck

September 14, 2011
All right, here's the dealie. My body has become some kind of huge wussfactory, where all my white blood cells are just hipsters who want to lay around and talk about their awesome ironic accessories rather than fight any kind of illness. Meaning I have AGAIN been sick, this time since Sunday night. I wasn't at work yesterday, and when I started writing this entry, I had to stop because my stupid body was being stupid. And ironic. Somehow. So anyway, this is Monday's response to BBAW. Huzzah! 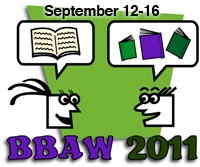 So I've never done this before, as this is my blog's first year of existence, but according to other blogs that I've read thus far this morning, today we appreciate each other. Which I am all for.
According to their site, "today you are encouraged to highlight a couple of bloggers that have made book blogging a unique experience for you." Totes. I can do that.
I come to Blogger from the now-universally-scorned Livejournal. Livejournal is mainly the residence of fangirls and super-weirdos (also Russians), but I love it for its commenting. Its main purpose is comment conversations, which forge friendships and make people generally love each other. When I joined Blogger, I was dismayed to see their standard comment section had no way to specifically reply to one person without the lame 'YourName-*insert comment*, YourOtherName-*insert comment*, which not only does NOT notify the person that you've replied, but frankly makes things all a bit too sticky and complicated to be conducive to real conversations.
Despite appearances, I do not have this blog to prattle on to myself. I got it because I wanted to join the book blogging community. Because of that, I am very very happy to have met these two bloggers:
Red at What Red Read. Aw, Red. I forget who mentioned her blog first, but I was delighted to find that not only is she around my age, but she's funny and I can respect her book choices (so rare! so rare indeed!). When I first joined the ranks of the book bloggers, I was nearing the point of despair because every blog I found seemed to be extolling the virtues of crap YA lit using giant neon font. But she does neither! AND she uses my favorite comment platform, which allows for specific-person replies and notifies you when someone's replied to you. So great. Yay conversation.
Emily at As the Crowe Flies (and Reads). Man, Emily's great. And I super-hope we both go to BEA next year so I can meet her. She's one of the few (ok, few that I've met) who actually gets paid for interacting with books. And she doesn't hate them! Amazing! When I worked at a music library, I wanted to stab the patrons with sporks and never look at a music score again. Kudos, Emily. I think the first thing I read of hers had to do with Eudora Welty, and I was like "Eudora Welty?? That's not Dean Koontz!" And there was much rejoicing.
These're two out of pretty much everyone I follow. I mean, if I follow you, I like what you write. And TBH, the main reason we probably don't have a comment relationship is that my workplace blocks some kind of blogger software that does not let me log into Google from blogs, so unless you have the "Name/URL" button enabled, I CANNOT COMMENT. Boo. And you're apparently too shy to make the first move. I get it. It's ok, we've all been there. Maybe someday we can meet, just not now. Just...not now.