Before I Go To Sleep: Getting Its Own Undeserved Post

February 08, 2012
All right. As is always the case, I have only a vague idea of what I'm going to say, but I'm gonna type some stuff out and by the end of this post, it will hopefully seem like something well-thought-out. Or at least have a hilarious picture (the latter is guaranteed).

After reading Raych's post on Before I Go To Sleep, I thought 'Hm. I like mysteries as much as the next fellow. What-ho, onward and so forth!' By which I mean I added it to my to-reads list on goodreads and then put it on my library Kindle queue.
For those unaware of its plot, this is BASICALLY it: a woman wakes up not knowing who she is, where she is, or who the dude in bed with her is. When she sees herself in the mirror, she's 20 years older than she expects to be. The dude is all "I'm Ben, I'm your husband, you had an accident and have 50 First Dates syndrome so you only remember before the accident and your brain resets itself every night when you sleep" (by the way, I fully admit that I love 50 First Dates -- judge away, judgeypants).
Ben goes to work, a doctor calls her and is all "I'm your doctor; we've been meeting secretly; let's meet today" and when they do he gives her a journal she's been keeping for a while, and -- and this is the part that always seem to get people, including me -- at the very beginning of the journal she finds that she's written "DON'T TRUST BEN."
Mysteries! Mysterious mysteries!
I confess a number of times I went "Wait, is that the solution? That's really lame. This better not turn into that kind of book." But rest assured it does NOT.
At the same time, this wasn't...that good. Meaning this will be no one's favorite book, unless that person is an idiot (or unless I like you, in which case your favorite book is stellar, as are you). Something about it just felt lacking, but at the same time, I read the last 200 pages in one go, and I NEVER do that. It's like 400 pages, depending on your edition, and kind of too long, but if you can skim it, I recommend doing that, because MYSTERIES. But also kind of lameness.
And if you approach mysteries the way I do, you'll come up with like five theories and then when one is proven, go "A-HA!" and feel all smug, although really what else was the author supposed to do outside of those five options? Nothing, short of wizardry. So maybe he should be cut some slack. Maybe.
And for those who don't read this to hear about books, here's a pug dressed as Scarlett O'Hara: 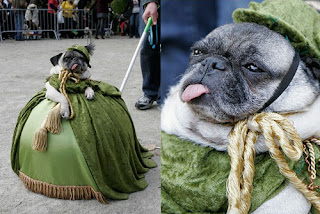