Where My Girls At?

February 22, 2012
Just so you're all aware, moderating comments is not my choice. My blog is not so over-run with companies wishing to force their unwanted advertising on my comment section that I feel the need to do this. It really just creates more work for me ("work" = clicking 'approve' on the comment). But Intense Debate is being wonky, and despite my having written them a stern note apprising them of the situation and wishing for a swift but peaceful resolution, they seem not to have fixed it. Yet. But in the very near future, the moderated comment Walls of Jericho will come tumbling down, and you will instantly be able to see your comment in all its glory without any approval by me necessary. One can only hope.
Are you all aware of the tumblr Better Book Titles? Because you should be: 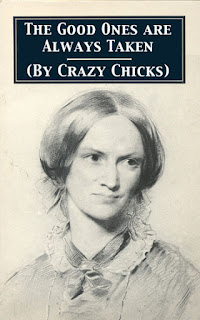 Which brings me to today's topic. Which I've just now decided will be women in contemporary literature. There're all these strong female characters in literature from the 19th century, and, partially because I don't read a lot of contemporary books that aren't written for 12-year-olds, I'm having a hard time thinking of modern day parallels (and no, Gone With the Wind is too old and doesn't count -- let's go from 1960-now).
Part of the problem seems to lie in the unfortunate fact that most of the latter half of the 20th century has been dominated by dude authors. Like, to a weird degree. I mean, you've got Harper Lee's one book. That's good. The Modern Library's 100 Best Novels list doesn't have a woman until no. 15 (Woolf, obviously, who doesn't fit in the post-1960 group) and another doesn't appear until Wharton at no. 58. The ONLY woman who does fit is Muriel Spark at 76 with The Prime of Miss Jean Brodie (which I'm not a huge fan of, but this is incidental).
To be fair, others have criticized this list for the same reason, so maybe I'm using the wrong list. But the fact remains that in the decades following what were supposedly huge leaps in cultural feminism, we have few standout female characters. The best one in recent decades is Hermione Granger (I'm equating 'best' here with 'most influential in a positive way'), but she's written for pre-teens/teenagers. Which is excellent!...for the next generation. There has actually been a series of strong female characters in YA in recent years, including Annabeth Chase in the Percy Jackson series and, of course, Katniss Everdeen in Hunger Games.
But I've read little of the period of literature I'm currently criticizing, so it's possible I'm full of it. But I don't think I am. My ear is finely attuned to the strains, however distant, of a kickass female character. If you have examples, preferably from non-bad books (if any of you mention The Help...), that would be swell. I'm thinking of characters like Francie Nolan, Hester Prynne, the aforementioned Scarlett O'Hara and yes FINE, insanely cliched Elizabeth Bennet.
To conclude: