*something clever to do with debbie downer*

February 29, 2012
I'm in a terrible mood today, bloggers. Terrible. One could say I just shouldn't update, but then I wouldn't be updating on LEAP DAY, which cannot be. But this is currently the case, only I just realized I DON'T HAVE COFFEE, which will be remedied.

So then all my post ideas were me being pissed off. First there was one about Charlotte Bronte's new story coming to light and why this WASN'T good news, because it was pre-The Professor, and I don't know if you've read The Professor, but it sucks. Plus the story's going to be translated from bad French and was an exercise for her tutor and is about a rat. I do not consider any of these factors reason for excitement.
So that's part 1 of me being a killjoy. Part 2 was when I started going through old unfinished posts to see if I had any happy ones I could just use now, but no, the reason I didn't post them was because I started typing them and then decided they were too angry. The most likely candidate was one from January when everyone was posting about Shakespeare. I don't care about Shakespeare. I go to his plays, sure. And I have a healthy interest in the Branagh/Thompson Much Ado, but only because THEY ARE PERFECT. But actual Shakespeare, reading him? Do not care/doesn't do it for me/find posts about him boring. 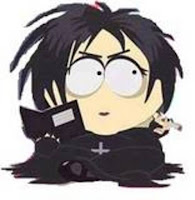 And then there's Chime, which I just started reading and have highlighted almost the entirety of the first 20 pages with "ARE YOU KIDDING ME" because every single line reminds me of Goth Girl from South Park.
Suffice it to say, I should have no interactions with human beings today. Did I mention I'm a receptionist? So that's going well.
But we're almost done with February! And I'm going to get coffee!
But for serious, that Bronte thing is not going to be good.