February 18, 2012
Were you all PERFECTLY aware that The Woman in White doesn't involve a ghost?? Here I've been thinking that this WHOLE time and I suddenly thought 'wait...what if it doesn't. Then in April you will be most disappointed indeed." And no! Not a single ghost in that whole giant book! So much sadness.

In my defense, there's a for reals (fine, "for reals") ghost called the White Lady. And then there's the book The Woman in Black. Which is about a ghost. So I don't think my expectations were unreasonable. Just in case anyone else had my totally rational reaction, here is the button/graphic/whatever for the readalong (which is April 2-30): 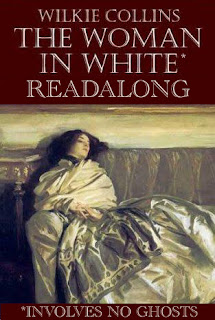 So now I'm just looking with suspicion at this book, because my expectations for it have been dashed and all I know is it's by Wilkie Collins, and that he was kind of nutty. He also had a GIANT forehead. I'm attributing all these things to him being named 'Wilkie,' because that's just silly, that is.
To conclude, here is the Mr. Linky: