February 17, 2012
SO. Last week I believe there was something of a brouhaha over getting to know bloggers. It involved tagging people and so forth, and pretty much everyone I would've tagged was ALREADY tagged, plus I hate tagging, so I eschewed that post, despite there being some lovely questions asked. And now I'm just going to tell you some random items, because personally, I'm very nosy and like to know things about people.
1. Hi. My name's Alice and I sing opera. Or 'am in the process of becoming an opera singer.' Yes. That. Opera is swell and my favorite. I rarely discuss it here because 1) book blog and 2) it tends to bore people because they don't bother to learn anything about it and instead think 'oh. Opera. That's boring.'
2. I live in Chicago and have lived in Illinois since I was four. Illinois is awesome, but very very flat due to a glacier coming through here in the last Ice Age. I learned this in a Geology class I took at the University of Illinois, where I majored in Comparative Literature. All my favorite professors had PhDs in Complit, because it is the best. Also, if you live in Illinois, you feel a certain proprietary claim on Abraham Lincoln. We know he was born in Kentucky, but he hated it and chose to live here, because it is spiffier.
3. For my 21st birthday, I went to the Abraham Lincoln Presidential Library and Museum in Springfield, Illinois with my best friend. It was swell. It's also where I picked up my twitter handle 'flubdubs', from Lincoln saying to Mary Todd that he wouldn't ask Congress to approve a bill asking for extra money for "flub-dubs for this damned old house, when the soldiers cannot have blankets!" I thought 'flubdubs' was hilarious, because it is.
4. I've wanted to have the job title 'cryptozoologist' without having to work for it since high school. My favorites are the Jersey Devil, the Thunderbird, and the Mothman. This is a kickass website explaining why the Mothman might have BEEN a Thunderbird. Be still my heart.
5. I've eaten hummus almost every day for about four years now. People said I would get tired of it two years in. This has not yet happened. As a result, I get a bit stupidly condescending when other people say they love hummus.

6. I didn't listen to pop music until I was about 15, at which point I stuck with Britney Spears, boy bands and No Doubt. Before that, it was solely opera and musicals. Therefore I have something of a giant gap in my musical education and I delight in people telling me Important Albums I Should Not Miss, as in all likelihood I haven't heard them (ex: last year I heard Fleetwood Mac for the first time).

8. Chicago is right on Lake Michigan. Lake Michigan is HUGE and looks like the ocean. In the summer, I like to go to a park right next to Navy Pier (this is a tourist trap where you can get Auntie Anne's pretzels and where Chicago Shakespeare Theater is for some reason located), watch the boats owned by people who live in the Gold Coast, and read.

9. I speak semi-fluent French because of my major, and spent five weeks in Avignon (which sucks. Avignon sucks). I was 21, it was my first time away from home for any substantial length of time, my host family didn't speak English, and I cried every day for about the first two weeks. The nice thing about medieval towns is that there are 800-year-old churches that are constantly open, and you can go sit in them, cry about your loneliness and then feel rather poetic about the whole situation.

10. I have three brothers, and our main source of bonding is Wayne's World. We don't discuss emotions, but we quote things, and this is how we relate. "A gun rack? I don't even own a gun, let alone many guns that would necessitate an entire rack."

That's it. No books. You know I like books, or at least tolerate them. To conclude, here's an example of amazing sticker placement: 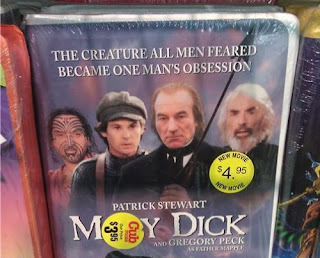