Austenian Adaptations on Film and Whether They Suck or Not

June 06, 2012
I'm totally begging off from today's Armchair post, because do you guys need to read three posts in a row about BEA topics? No. Not from me, anyway. Because even though it's supposed to be about networking, I'd probably somehow be all "READ THE SISTERS BROTHERS" again.
Austen adaptations? Austen adaptations.
I don't talk about Austen much on here, because OMG ARE WE NOT DONE WITH HER YET? (no we are not, because she is awesome) It began in 1995, and since then this Austen revival has just been coming and coming. I think it might be dying down now. Maybe. But her stuff is still making a shitload of money, so....maybe not. Anyway. Here're some film adaptations of her works:

Pride & Prejudice
Oh, hi, Adaptation Never to Be Equaled. What do you say about this? It's five hours. It's amazing. It has Helena Bonham Carter's brother in it. Nothing this awesome will ever be made again. And now I want to watch it again, but that feels like something that should be done with one's college roommate, because marathoning the five hour P&P was an essential college activity. For, y'know, the cool people.

Sense and Sensibility le Film
Yeah. All right. Emma Thompson's too old to be Elinor. BUT WHATEVER I AM NOT LISTENING TO YOU. Ang Lee directed this. Emma Thompson wrote the screenplay. She and Edward are SO VERY CUTE. And Alan Rickman's in it, so....if you like him, that's great (did I mention I don't like Alan Rickman? and if I don't say 'this is all anyone'll indignantly yell about in the comments,' that's all people would indignantly yell about in the comments). Let me just blow your minds and say this came out two years before Titanic. I KNOW. Kate Winslet was always a good actress. Titanic just has the shittiest screenplay ever. Anyway, in terms of Austenianness, this cuts out stuff, INCLUDING Willoughby's slight redemption, but THERE WAS NO TIME. And some things gotta go. So for a theatrical film, this is an AWESOME adaptation. To get the full S&S film experience, though, you gotta pair it with this:

Yesssssssssss. I love this. The screenplay's by Andrew Davies, who takes English things and sexyfies them (he also wrote the '95 P&P script, which is not so much sexy as AMAZING BECAUSE "I SHALL CONQUER THIS" WHICH IS NOT IN THE BOOK AND OMG). It basically is complementary to the '95 film version, because while it's lacking some of the things that film has (screenplay by Emma Thompson, amazing acting, Harriet Walter as Fanny Dashwood), it DOES have actors who are age-appropriate, a believable love story between Marianne and Colonel Brandon, A HILARIOUS GINGER CHILD, Willoughby's aforementioned redemption scene (which I think is important), and just....more. Because it has way more time. It's awesome and you should watch it.

Emma
This is terrible. Stay away. 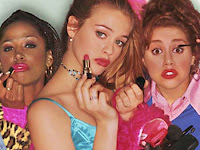 Clueless
ODES WILL BE WRITTEN ABOUT MY DEVOTION TO THIS MOVIE (by me). Clueless is the finest adaptation of Emma there will ever be. Ever. No, I don't think you're getting it. When (and SPOILERS SPOILERS SPOILERY SPOILERS if you haven't read Emma) Frank Churchill's kiiiind of flirting with Emma and she misinterprets it and it turns out he was secretly involved with Jane all along? How do you adapt that for the modern screen? BY MAKING HIM GAY. Omg. This movie is amazing. Elton the churchman becomes Elton the douchebag, and Emma's portrait of Harriet that he asks for becomes the photo Cher takes of Tai WHICH HE PUTS IN HIS LOCKER. I...I can't even. And I fully admit this is colored by Clueless coming out when I was ten, me watching it obsessively, etc etc, but NO. It is amazing. And in conclusion, may I please remind you that it does NOT say R.S.V.P. on the Statue of Liberty.

Lost in Austen (which isn't an adaptation, but eh)

Lost in Austen = self-indulgent, Mary Sue-laden crap.
Projection tends to piss me off. It's just entirely self-centered and disregards the actual work and its intention. And the series not only played off that, but wrote almost all the characters completely OUT of character. Mrs. Bennet would not talk to Lady Catherine that way; I'm sorry if idiots want her to — it's not in character, and indulging it is stupid. It's like when, out of all the amazingness that was Harry Potter book 7, all people could quote was Mrs. Weasley's entirely-in-caps line. "Omg she swore and it was in caps! That was totally the highlight!"
The only person I semi-liked was Lady Catherine, but that's because Lindsay Duncan is so very awesome. I hated this series. HATED.

Mansfield Park
In the first two minutes of this movie, they destroy the Fanny Price from the book, so I stopped watching, because it was a movie, but it wasn't a movie about Mansfield Park. I also did this with the 2005 P&P. Because it sucked. "Let's totally subvert the intentions of the author! No, I know she made fun of the Romantics, but OMG WHAT IF WE MAKE THE MOVIE BYRONIC IN AN UNHILARIOUS WAY?"
What else is there? (answer: a billion more things) There was an Emma adaptation a few years ago with Romola Garai in it that didn't seem too bad, but I still haven't finished it, so maybe it's not too good. The 1940 Greer Garson/Laurence Olivier P&P is hilaaarious, because it completely lets go of the book and is like "And then Elizabeth and Darcy had an archery contest! And then they were BFFs! But then not so much. And then everyone ended up with husbands, even silly Mary!" It's pretty great.
The Jane Austen Book Club

And I suppose my last pitch in the not-actually-an-Austen-adaptation series (this would be aside from Lost in Austen, which I guess doesn't make it a series, but ANYWAY), is The Jane Austen Book Club. I fucking love that movie. I didn't read the book, and I heard it's terrible, but I went into this movie with SERIOUS reservations, and I love it. Like, immediately went out and bought it love it. And it's so booky! And Hugh Dancy talks to Maria Bello about Ursula K. Le Guin! And he buys an Austen collection and asks if they're sequels and awwwww. I think that is the ONLY "we're modern ladies and we're going to involve ourselves with Austen" type thing I like.
So that's it. So many Austen adaptations. And we'll probably have more, and someone'll probably cast Keira Knightley again, because she's English, and then I'll complain more. It's the great circle of life.