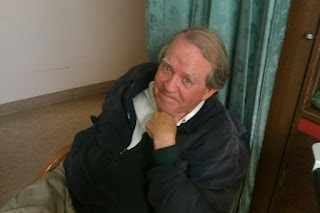 This is my dad. He is super-awesome.
I posted about him somewhat recently, mentioning him being a professor of Aerospace Engineering and a sci-fi nerd dating back to the '50s. He is adorable and I love him.
My mother is the much more dramatic of my parents (she was an actress), so she has been proclaiming her love of literature my whole life, encouraging me to read things that "weren't shitty" and taking me and my brothers to bookstores for as long as I can remember.
My dad is quiet about his reading, but he does a lot of it, which is something I've only realized in recent years. I knew he read a bunch of this as a teenager, because we have a billion back issues in our basement:
I asked him who his favorite authors are, and they're markedly different from everyone else's in the family (although I should state that my mom and I are maybe the only ones in our six-person family with any kind of overlap). He loves Kurt Vonnegut ("Cat's Cradle is the best") and Winston Churchill, the latter of which somewhat surprises me because he was five when World War II ended. But people your parents revere, you maybe revere a bit too? Not that I'm sure they did. But really, who's going to say Winston Churchill was a dick and shouldn't be respected? Aside from like, Hitler.
The only other author he mentioned was Robert Heinlein. More specifically, Stranger in a Strange Land and The Moon is a Harsh Mistress. He also really likes books about explorers, which is just really cute (he's going to read this and I don't know how he feels about that adjective in that context, but it TOTALLY IS CUTE).
I have read precisely ZERO of the books/authors listed above (except for a slight foray into Heinlein, whom I'm not crazy about). Which brings me to my point, other than making a post about my dad on Father's Day: How much of an obligation do we have to read books that have either influenced our parents, or are beloved by them?
I guess in today's day and age, one doesn't have any kind of technical obligations to one's family (for the most part). It's not like we're in pioneer times, and if we neglect our kin, they'll die because their crop didn't come in and they have no other recourse but depending on blood relations. But in our self-obsessed, socially networked contemporary culture, I guess it becomes less of an obligation to read something your parent enjoyed and thus learn a bit more about them, and more of a "Oh, I wonder how this went into how they raised ME?"
Not that a parent's favorite authors can necessarily provide a direct link to the style of one's upbringing. "Oh, they liked Hemingway, so there was a lot of us sitting in bars, drinking whiskey while uttering terse statements to each other." (I assume this is what happens in Hemingway) But things can be gleaned about the overall character or likes of a person. My dad's a bit quiet, funny, and respects people who speak their mind (which, now that I think about it, is probably why he and my mom get along so famously).
I plan on reading at least some Vonnegut in life, and while I might have anyway, it's going to be bumped up considerably on my reading list because of my dad's liking for him. And now if I may, I shall close with the (arguably?) most famous Churchill quote:
Woman: "Sir, you are drunk!"
Winston Churchill: "Yes, madam, I am drunk, but in the morning, I shall be sober, and you will still be ugly."