October 09, 2015
Do we all know who Gerda Lerner is? No, of course we don't. Gerda Lerner was a feminist historian who said some really kickass things, and whom I discovered through the glory that is Tumblr.

The whole wonderful gifset is here, but here's its essence:

WHY WOULDN'T YOU WANT TO READ A BOOK BY THAT LADY.

So in 1986, she published the first of two volumes, The Creation of Patriarchy. Ever since reading Hanne Blank's completely wonderful Straight: A Surprisingly Short History of Heterosexuality, I've been extremely interested in the idea of 'doxa' or 'this is right because it's how things are and how everyone knows it should be.' WHICH IS A CULTURAL CONSTRUCT.

Gerda Lerner looked at how our culture is set up and HAS been set up for millennia and said "Well, I wonder if we can trace the roots of patriarchy," and then she spent seven years researching and writing a book about it. A lot of which centers around Mesopotamia, because apparently there's a ton of information out there about Mesopotamia?


I'm only on chapter 2, but on the "How Academically-Written Is This Book" scale, it's like a 6 or 7, so I have zero hope of finishing it soon. Let's talk about highlights so far!

Another question which I hoped my study would address concerned the long delay (over 3500 years) in women's coming to consciousness of their own subordinate position in society. What could explain it? What could explain women's historical "complicity" in upholding the patriarchal system that subordinated them and in transmitting that system, generation after generation, to their children of both sexes?


Now I'm not sure when she's saying our consciousness of this began, because The Book of the City of Ladies by Christine de Pizan from 1405 is pretty much her going "Wait, wtf, why does it have to be like this? I'm pretty sure I'm smart and awesome." But given how far back humanity's past goes, and how infrequent recorded comments like de Pizan's have been throughout history, I'm pretty sure it's only recently we've had the massive groundswell of women echoing de Pizan's comment.

Chapter 1 is called "Origins" and talks about how to frame the questions for this sort of topic. We obviously approach history and everything in life with a value-ridden framework that we can't free ourselves from, so it's important to take that framework into account.

For the historian, the more important and significant question is this: how, when, and why did female subordination come into existence?


Most of chapter 1 is spent discussing the major positions (in 1986 at least) on those three questions, which were held by traditionalists, feminists, and Marxists. That last one seems reeeal specific, but I'm gonna accept it because I don't know any better.


expect women to follow the same roles and occupations that were functional and species-essential in the Neolithic. They accept cultural changes by which men have freed themselves from biological necessity. The supplanting of hard physical labor by the labor of machines is considered progress; only women, in their view, are doomed forever to species-service through their biology . . . At a time when overpopulation and exhaustion of natural resources represent a real danger for human survival, to curb women's procreative capacities may be more "adaptive" than to foster them.

Something I'd like to have verified is if hunter-gatherer societies, despite placing a higher VALUE on the results of big game hunting, in fact depended more on gathering and small game in their day-to-day existence. That sounds right, but we also hunted a whole lot of large species to extinction when we came to North America, so we had to have been killing them pretty often.

I tweeted at anthropologist John Hawks about this and his response was fairly vague (not his fault! the reality is vague!): 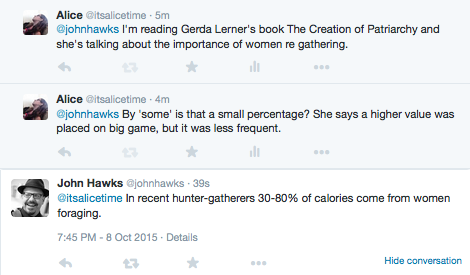 Sooooo "kinda." Kinda is the answer. Depends on where you lived.

Lerner seems to approach her subject pretty fairly -- when another academic stated that the position of goddesses in a culture meant they were a matriarchy, she says:

In view of the historical evidence for the coexistence of symbolic idolatry of women and the actual low status of women, such as the cult of the Virgin Mary in the Middle Ages, the cult of the lady of the plantation in antebellum America, or that of the Hollywood star in contemporary society, one hesitates to elevate such evidence to historical proof.

The other chapters in the book are:

2. A Working Hypothesis
3. The Stand-in Wife and the Pawn
4. The Woman Slave
5. The Wife and the Concubine
6. Veiling the Woman
7. The Goddesses
8. The Patriarchs
9. The Covenant
10. Symbols
11. The Creation of Patriarchy

Gerda Lerner is most probably the shit.