Dickens and My Kind of Overblown Prejudice Against Him

May 03, 2011
Like many people, I have a tendency to simplify things in my world through generalizations. Generalizations are awesome. If I were younger and more crass, I might even say they were the shit. If we didn’t have generalizations, every single topic would take hours to go through in our minds because there are so very, very many exceptions to absolutely everything.
With this in mind, I’m going to talk about Dickens. I’m going to be writing about him soon for the Austen vs. Dickens thrown-down that is currently sweeping the interwebs, but for right now I’d like to discuss his douchiness. My one thing I’d like those touchy people out there to bear in mind is that I am well aware that I’ve never met Mr. Dickens, and I do not know the exact circumstances of his mid-19th century situation. Could there have been mitigating circumstances to alleviate his douchiness? Yeah, probably. But I’m still going to be pissed off about it. 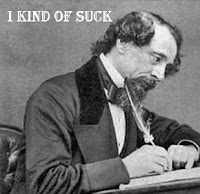 For those who have not read an excessive amount of his works (read: maybe four or five), there is a pattern to the lady characters. Namely, heroines are not allowed to be funny. Blowsy side characters are, yes, and almost always unbeknownst to them, but heroines are strictly forbidden from humor. With the exception of Bella Wilfer in Our Mutual Friend, but then, she’s not quite a heroine to him, is she? Louisa Gradgrind is also an exception, but Hard Times is pretty much just a giant essay on why Utilitarianism is bad, so I see her as less of a character and more of a tool used to prove a point. But that’s another post.
I can already feel my feminist hackles rising, and as I strain not to rant here in a serious way, for it is a place of lightness and frivolity, I shall calm myself. *breathes deeply* Right. So Dickens’ heroines have to be saint-like. Their main features tend to be that they only want to care for those around them and hopefully get married so they can do that 24/7.
Dickens’ particular brand of hypocritical asshattery comes about because, despite his constant assertions of how wonderful the Victorian nuclear family can be, he leaves his wife in 1858 and takes up with – dear God – an actress. The lowest moral being imaginable (if you’re a parson in 1845). But he continues writing about how the ideal woman is a homebody who spends all her time caring for those around her and having close to no personality at all.
Unlike Steinbeck, whom I would make out with in two seconds, I have zero interest in meeting Dickens (since both of these are so very possible, I thought I’d make my stances clear). My entire perception of him is colored by this wife-leaving fact. And not even so much the wife-leaving, but the subsequent hypocrisy of his books. It just sucks. I still unfortunately love said books, and will be writing about why he kicks Austen’s delightful Regency ass in nine days, but the reading of them is always marred for me the slightest bit by him being a douchebag.