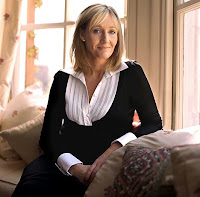 Harry Potter. Why is it so awesome?

In 2009, I started a re-read of the series, which fortunately coincided with my ten year anniversary of first starting it. I got halfway through Goblet of Fire and got swamped with other things. What with the advent of the second part of the last movie this coming July, I've picked it up again. I just finished GoF, and have started Order of the Phoenix, which is probably the one I've read the most. I harbor an undying passion for Gilderoy Lockhart, but there just isn't enough stuff in CoS for it to be one's favorite.

Of course, I'd argue that there's a little too much stuff in OotP, but really just the Grawp storyline. That needs to be cut right out. Everything else is swell.

Anyway, my original question. Why is it awesome? Harry Potter, I've found, unlike basically everything else I've ever read, can make me laugh on one page and literally cry on the next (this laughing/crying usually has to do with the Weasleys, as EMOTIONAL THINGS happen to them). I suck at analyzing literature (which is why I have a book blog!), so I have no idea how J.K. Rowling makes you care about her characters so much, but all I know is that when I read about Amelia Bones' -- an INSANELY minor character -- death in book 6, I had to put the book down and cry. Because I had just read about her questioning Harry about his Patronus, and now she was gone.

I think two of the only other authors who've made me that attached to their characters were Dickens and Edith Wharton, and definitely not with everything they've written. Dickens, maybe just with Bleak House, and Wharton with Ethan Frome. But even with Dickens, his characters tend not to be real enough for me to really, really care about them. They're almost all constrained by what was proper for the Victorian novel.
Basically, Harry Potter is the best thing ever and the fact that J.K. Rowling isn't a smug jackass after her books have been lauded almost to the point of worship means she's an extraordinary human being.

Does anyone have a different favorite? I would've said Deathly Hallows, but I feel like saying that's one's favorite HP is like a Christian saying the Bible's their favorite book. "Yes, that's a given, but ASIDE from that..."