Fanfiction and Why It Doesn't Suck

May 31, 2011
Like most female 20somethings, I was at one point very into the fangirling scene. I wrote fanfiction, I made music videos, put together fanmixes, and created horrible graphics using a version of Photoshop I or someone bearing a resemblance to me possibly downloaded in my college dorm room off Limewire.
I would here like to interrupt myself by stating that perhaps “most” was the wrong word, as I have met many normal female 20somethings who don’t have a fricking clue what I’m talking about when I use words like “fangirl” or “ship” as a verb involving the romantic involvement of two fictional people. So by “most” I mean “most of the people I met online in fangirl communities.” Or perhaps “all” in that case.
Anyway. Fanfiction is probably always going to be controversial, in the dumbest way something can be controversial. Are we talking about climate change? Well, no, we’re talking about whether or not it’s at all okay for a 15-year-old to write a scene where Mulder and Scully get stuck in an elevator and the lights go out, and – oh, looks like some feelings are gonna come to the surface.
Because fan fiction has one point, and one point only: to get two characters to have sex. Sure, they might not always have sex IN the story, but that’s gonna be the eventual outcome. And don’t try pointing me towards fan fiction with an actual plotline and no romantic entanglements. That shit isn’t real fanfic. No one wants to read that. If I wanted to read something with “plot” I’d read a real book written by an author who creates his/her own characters. When someone tries writing regular fic with a plot (ex: Mulder and Scully are on an undercover mission to stop Krycek from helping the Russians, but – uh-oh, looks like the hotel they’re staying in only has one room left), I will skim until I see the words “breathed,” “mouth,” or “stared.”
This was all recently brought to mind because my oldest brother sent me an e-mail with the subject heading “You can never undo this.” Attached was this image, which he says I made in 2002 (I have no recollection of this, but there’s no other reason on God’s green earth why he’d have it on his computer): 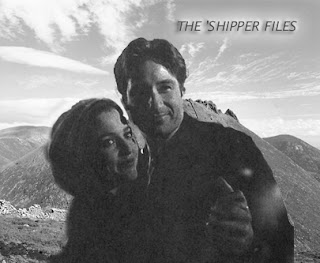 I don’t know why they’re dancing next to a hill. I can only pray that it was supposed to be horrible, and just part of some joke I was making about people who make really crappy graphics. And X-Files was basically over in 2002. Why would I do this? WHY?
Anyway. So that image, coupled with the fact that I recently read the first fic I’ve read in a year or two (Ben/Leslie, Parks and Rec, it is awesome), made me ponder how viable fanfic really is as a thing. Is it okay? I would argue that different kinds of writing serve different purposes. You want Severe Thinky Time, read Borges. You want Kind of Numb Brain Time, read Charlaine Harris. You want Super Happy Squishy Awesome Time, read fanfic. It doesn’t make you more intelligent, and it certainly doesn’t help you become a better writer, if that’s what you’re after, but it can make you happy in the I Feel Surrounded by a Pure Golden Glow of Happiness kind of way. Because two characters that you love just made out on a couch after flirting in a true to character way (we’re ignoring bad fanfic here, which is what the majority of fanfic is).
I don’t read a lot of trash lit, but I imagine that’s why people read some of it. That or for the aforementioned brain numbing. No, it’s not amazingly written, but it can make you really happy. There has to be a place for that. If it’s the only thing you’re reading, that’s a problem, in much the same way that having a few drinks now and then is really nice and shouldn’t be frowned upon, but you drink every day and you’ve got a problem, my friend. Don’t just read what I now want to call “shit lit” because it rhymes, but totally read it some of the time if you want to. And if someone makes fun of you for reading whatever it is you’re reading because they see it as lowbrow, tell them to go screw themselves.