My Carefully Thought Out — Nah, It's Stream of Consciousness Again

May 27, 2011
I am reviewing once more! Ok, so here's the thing with my blog: I want to do book reviews, but I don't like writing them. There's a way of doing them I've never really grabbed a hold of mentally, so I prefer to just rant about book-related topics for the most part (or do blessed, blessed memes).
But if I really love a book, or it's consumed a lot of my time (*coughTheOldCuriosityShopcough*), I feel I should mention it. And tell you all it's WAY AWESOME AND YOU SHOULD READ IT.
The New York Regional Mormon Singles Halloween Dance Review 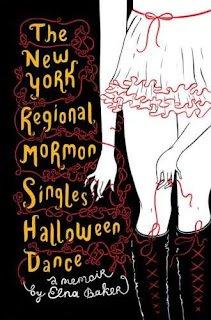 Elna Baker is a single Mormon lady living in NYC. Her dad works for Boeing, so she's lived all around the world, but she got into NYU and just kind of stuck around after that.
I should make clear that this is a memoir and not fiction.
Like most of my favorite books, this is split into a series of essays, although they were chronological. She talks about things like working at FAO Schwartz and dealing with NYC mothers; her tremendous weight loss (don't look for pictures, for there are not any); and the many, many guys she's kissed.
I'm not usually big into introspection, but she manages to do it while remaining funny. As a former conservative, straightline (did I make that term up?) Christian, I was totally with her on the struggle between wanting to either fully commit to your religion in its most literal way, or just eschewing the whole thing and becoming "worldly."
She's honest to a fault, which impressed me. I mean, one can never truly know if someone's being honest, but she admitted things I don't think I'd be able to, and while there isn't exactly a neat resolution (I mean, she's like 30 years old), she does an excellent job showing her slow evolution from teenage Mormon to Complicated Elna Baker Who Can't Subscribe to Just One Set of Beliefs.
I rarely recommend books. But this one is awesome and hilarious and thoughtful and should be read.
Age 30+ Books posted a video of hers when blogging about this book, so I shall copy her and do the same, because it's great.