A Book With A Chapter Entitled 'King Liver and Bile-Bouncers'

June 18, 2011
I have spent today being emo, but also journeying to the outlying suburbs and purchasing things. Things of amazingness!
My grandfather lived in Geneva, Illinois, which is a small, perfect suburb of Chicago. It's about an hour out on the Metra train. There's a river and tiny shops and a chocolate store and a festival called Swedish Days, as apparently there's a big Swedish presence.
I met up with my second cousin Esther, who directed me to a basement antique shop called The Antique Market. It's one of those places that has stuff from the last 100+ years spread out in a seemingly haphazard fashion. Bakelite dollhouse furniture next to old cookbooks and costume jewelry, etc.
Letting me loose in that kind of place is tantamount to putting Ferdinard the Bull in a florist's shop — he'll just never leave. After I bought my first round of items, I discovered there were two OTHER parts of the store I had somehow missed, and they also had things I obviously needed.
Among these things were three books I am inordinately excited about. Yes, I have over 150 books in my TBR pile. BUT! Who wouldn't buy these? WHO WOULD NOT? 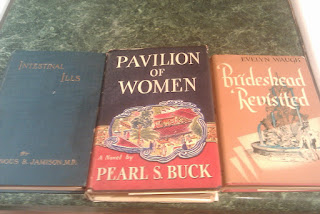 Intestinal Ills is by Alcinous Jamison and was reprinted in 1919. It starts off with a poem, one of the stanzas of which is
In the intestinal canal
Waste matter lay, and sad to tell,
Was left from day to day;
And while it was neglected there
It undermined that structure fair,
And caused it to decay.
That cost me FOUR DOLLARS. There's also a chapter entitled The Origin and Use of the Enema, which states, "The British Medical Journal, reviewing the newly published Storia della Farmacia, says that Frederigo Kernot describes in it the invention of the enema apparatus, which he looks upon as an epoch in pharmacy as important as the discovery of America in the history of human civilization."
This is clearly the greatest book of all time.
The other two I'm merely jazzed about because they cost me a combined $14, were both published in the '40s, and both have slipcovers. Amazing. I'd tell you all to go to that shop, but then where would I get cheap awesome books?
I also bought a trio of photographs of turn of the century women, all of which I am going to frame and put in my room. I took a picture of them and tried e-mailing it to myself from my phone, but instead it e-mailed me a photo of my ex. WTF, PHONE? That was NOT cool. This calls for repeated listenings of Gives You Hell by The All-American Rejects. *flounces off*