June 04, 2011
Every year in Chicago we have something called the Printers Row Lit Fest. It's usually unbearably hot, but you go anyway, because you can potentially find cheap books.
Basically, booksellers from the Chicago area set up little vendor tents and people browse. And it's hard to walk and people seem fond of standing in the middle of the already-narrow passages between tents and everyone's pretty smelly. They have bands performing and people selling bottled water. It's kind of like Taste of Chicago, only without cops always on the verge of breaking out their riot gear, because the attendees tend to look like this: 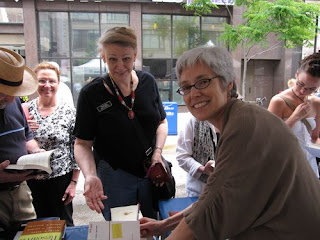 I went in the middle of the afternoon, so when it was hottest really, because I have some skills, but thinking logically is not counted among them. I walked around for about an hour, and was holding three books in my hand at a bookstall when the wind picked up and the guy manning the stall  started frantically throwing things in bags while saying "STORM'S MOVIN' IN! WANT A BOOK, BUY IT NOW!"
I thrust my money at him, felt bad asking for a plastic bag, as he was obviously about to lose his shit over this storm and his books, and then trotted off for the El before the storm hit. I passed an Indian wedding on the way, which seemed to have just kinda set up camp on the street. It was awesome.
SO. I am home, and my books are so amazing I need to blog about them. Here they are: 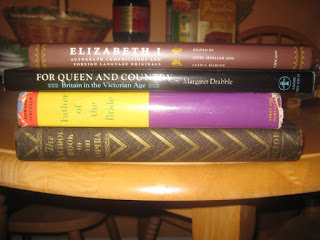 Elizabeth I: Autograph Compositions and Foreign Language Originals
For Queen and Country: Britain in the Victorian Age
Father of the Bride
The Victrola Book of the Opera, 1929
AGH. Okay. A long time ago I got the University of Chicago Press Collected Works of Elizabeth I, which is a fancy book and therefore kind of pricey. This companion volume was sitting on the table for the U of C booth, and when I — just on a whim — asked what the price was, I almost freaked out in front of my fellow Chicagoans when the girl said $5. "But....how?" asked I. "They want people to buy books?" replied the girl.
Very well then.
So then I find the other three books at a stall where everything was $3. Please note that, while I certainly hoped I wouldn't spend this much, I had taken $100 from my bank account prior to coming there. You just never know when that early edition of Auntie Mame is gonna smack you in the face, and then there you are, high and dry with only the $20 you allocated for book purchases. Such is the stuff regrets are made of.
But no, $3 a book.
If this were the 19th century, I'd be overcome with the vapors. I spent $14 total on all these things. Best day ever.
Oh, I should probably mention that I saw a book called Fallen Women by Mason Long (1881). I wanted to buy it just to display on my shelf, but it was $100. Alas! For another day.