That YA Article Everyone's Freaking Out About

June 06, 2011
All right, so the Wall Street Journal published an article that has made a lot of people upset. Basically it seems to say that YA lit is too dark nowadays and the Youth of America should be reading something else.
The thing is, in the wake of Twilight, there's been a whole lot of dark, shitty books for teens out there. Personally, I don't read teen books. It's basically either 19th c. lit or books for 10 to 12-year-olds. From what I've seen of it, teen lit seems to focus on immeasurably stupid themes. If I ever have a teenager daughter, books with titles like The Lipstick Laws will be banned from the house. I don't have a problem with banning books if they're banned for being idiotic. "I'm sorry, sir, your book is...too dumb. Way, way too dumb. And we just can't have our children reading that, can we? I want smart children in our country, how about you, sir?"
There are going to be people saying things like "Oh, but if dark things happen in real life, shouldn't they be portrayed in literature?" Yeah. Okay. I get where you're coming from. But let's also not forget that teenagers are for the most part highly impressionable morons who don't have things like full-time jobs or Things That Actually Matter happening to them, and therefore they have a lot more time to focus on things that don't. And to make huge deals out of them. If they read hugely dark books, and that's pretty much what's available at Borders, that's what they're going to focus on. And I, for one, don't want a new crop of emo teenagers running around. If emo kids run. I don't think they actually do.
Coincidentally, I was recently at Borders, saw the teenage lit wall o' books, and was so disgusted by the proliferation of black covers and dumb pictures, I had to photograph it. So here is what's available if you're 14 and feelin' frisky in the reading department: 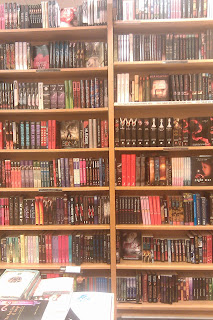 Ewww.
I had an English teacher in 6th grade who told the class that real life isn't like Disney. Things don't usually end happily. I took this to mean that in all my stories, all the characters had to die, usually in gruesome ways, because this is "realistic." I feel like that's what a huge group of YA authors has decided. "Kids today want things that are real; let's write about cutting and sexual assaults." Should those things be addressed? Of course they should. But they have to be handled really, really well (it looks like the book Shine addressed in the article might do just that). And I'm sorry, but I distrust the likelihood of a ton of YA authors (or really a ton of authors of any genre) to do that well. It seems like most are just coasting on a trend, which I find dangerous in this case.
So, okay, do these books have a purpose? Some of them do, yes. And for teenagers who have been victims of hate crimes, or sexual abuse, or who suffer from anorexia, it's great that YA lit can now talk about these things instead of just being about Nancy Drew speeding along in her little red roadster (although who doesn't love Nancy Drew?). But if my son or daughter was like "Oh, I'm reading this book about a boy who's gay and he gets beaten almost to death," I'd say "Mm! I see. Okay. How about this: don't beat kids ever, and especially not because they're different. Lesson learned, done."
No, I don't completely agree with the article. It smacks somewhat of a terrified mom trying to warn other already-terrified moms. But it is making a valid point in that a lot of these books 1) don't need to be as violent/graphic as they are, and 2) a lot of them kind of suck. Actually, I don't know if she makes that latter point really, but it's true. I'm assuming this article and responses to it will cancel each other out, so really this whole entry has been a waste of space. I just get annoyed when bloggers get all fired up about something that reeeeeally doesn't matter and then act like their response is the Second Coming. So this is my petite defense. I refuse to engage in an argument about this, as I have better things to do. Like look up pictures of Rose Byrne (she's so pretty!). Reading Rambo OUT.