May 17, 2012
Two years ago, I was linked to a vlog called Feminist Frequency. The subject was the Bechdel Test, which succinctly is:

1. Does a movie have at least two women in it
2. Do they talk to each other
3. About something other than a man

At the very least, it's eye-opening about how for-granted we take a scarcity of women in film, despite us making up, what, 51% of the global population now?

This test was invented by Alison Bechdel in her comic strip 'Dykes to Watch Out For.' I did not know the latter; I thought it was in a scholarly paper or something. But then I saw she was coming to Chicago to speak about her new book/graphic novel, so -- ! She writes graphic novels! Very well then.

Fun Home is EXCELLENT and I recommend it to everyone. I don't usually do graphic novels (they feel like cheating?) but she is SO smart and SO articulate, and the drawings are clear and communicative. And she talks about James Joyce! Whom I don't even like, but how impressive! What more could you want? Go check it out.

Are You My Mother?, I'm more reticent about. I haven't finished it yet, but I spoke to some people in line at the reading, and apparently it continues in the same vein for the rest of the book. Namely, she keeps on about psychoanalysis. Now I am FINE with this branch of study as long as it's not being used as fact. Because we really, really can't know. But my issue with this book is she seems to take it and treat it as a definite. As in "Oh, this thing from when I was three months old is why I do this," or "I got hit in the face with a branch because my unconscious was telling me something."


I mean, maybe. But since I'm guessing a fair number of her readers don't heart-and-soul buy psychoanalysis, it just seems a bit alienating. She does, however, talk about Virginia Woolf, and I have Learned Things from the book.

At the reading last night, she showed some slides of pages of the book while reading aloud, and then there was a Q&A (I asked why she didn't use psychoanalysis in Fun Home as opposed to the second book -- short answer: it didn't fit in Fun Home). And then a signing! Hurrah! I asked her to write one of her favorite words: 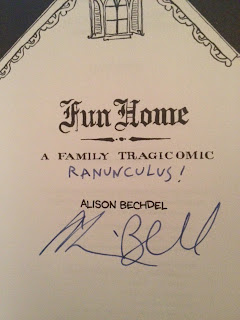 A word I was very excited about until my best friend texted me that it means "A large genus of about 600 species of plants -- including buttercups."

I thought it meant this:


She was very nice, though, and my friend John came with me, despite being one of about four males at the event. And they had free cheese! Which basically had me doing a little dance at the table.