I'm French. Why do you think I have this outrageous accent, you silly king?

May 04, 2012
I'm going to talk about something I don't have a lot of background in (oh aren't you just SO excited already?). And that subject is the cool thing that happened in France in the mid-19th century.
Okay, so let's talk Romanticism. We have the Enlightenment, where everyone gets VERY jazzed about Reason and Science and the Progress of Man, and we have hilarious authors like Swift, Fielding and Pope. Then those people have kids and the kids say "Fuck this science shit!" And then they go off and contemplate the beauty of a daffodil.
And this hit Germany first. Why, I don't know. Again, this is all cursory knowledge that I've decided to take and write assertively about. As is usually the case here. SO, from Germany it travels to England, and creates a bunch of emo poets. And as time creeps on, the Romantics have kids and THOSE kids say "Fuck daffodils!" and they decide to be REALISTS.
What's oh-so-interesting about France in the mid-19th century is that Romanticism and Realism hit France AT THE SAME TIME. Meaning there are Important Authors in France concurrently writing in the two styles. The primary two authors? Balzac and Hugo. Balzac lived 1799-1850 and Hugo lived 1802-1885. And it's awesome, because they're obviously influenced by similar things in terms of culture and political climate, but they take it in opposite directions.
More specifically, Balzac is like "Once upon a time -- right now -- there was a house, and here is a painstaking description of the house, and here is a gentleman of our time living in the house, and oh my, he's living in embarrassed circumstances; look at how FAMILIAR all this is!" And Hugo is more "Once upon a time -- LONG LONG AGO -- there was a deformed person and OH his emotions and OH society and OH I'm going to talk about the French Revolution for 50 pages now."
Hugo distanced his subjects and used enormous characters (not...not physically enormous. necessarily.), and Balzac made everything ridiculously current. And it was happening at the same time! Different movements! And they were both immensely popular! Fantastic. Good one, France. 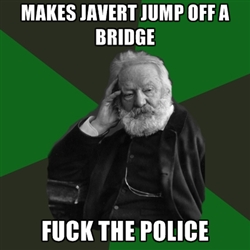