Merry post-Christmas, all. I have to work today. I'm not sure why. Pretty sure it's me and two accountants in the office. But this is good! It gives my day structure. Otherwise I'd sit at home, eating whatever food I could cobble together from my neglected fridge and watching Xena: Warrior Princess (SHE WAS FORGED IN THE HEAT OF BATTLE).

I finished The Night Watch, but I will talk about that LATER. Suffice it to say it's really good and you should read it. Unless you don't like the gay. But then you should read it anyway, because IT'S NOT GOIN' AWAY.

Christmas was semi-eventful, in that my little brother and I watched The Adventures of Huck Finn and I cried like four times ("Don't you cry for me, Mr Finn") and at our family party I ended up locking myself in the bathroom because family is crazy, amirite? Unlike the 20something girl who locks herself in the bathroom. She's juuuust fine.

The only two books I asked for were Breakfast of Champions, because my dad loves Kurt Vonnegut, and The Amazing Adventures of Kavalier & Clay, because everyone says it is way awesome and used bookstores almost never have it. We were given Christmas Eve presents, and I got Weird Things Customers Say in Bookstores, which I was excited about because SOME OF YOU (I don't remember who) have said it is hilarious. And then, of course, I had to go to Barnes & Noble at one point and buy Fried Green Tomatoes at the Whistle Stop Cafe. But other than that, NO books.

Can we talk super-quick, by the way, about the awesome present I got my four-month-old niece? 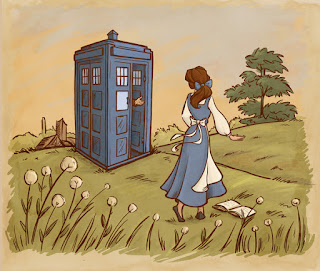 It's by Karen Hallion, and her Etsy shop will be open again tomorrow. She has Firefly stuff, and Princess Bride and Star Wars, and basically she is super-awesome. And I totally didn't get a discount for pimping her  work. I just think it is ah-mazing.

You all better post pics of the books you got or I am going to be MIGHTILY put out.