March 07, 2012
All right. It's late, hopefully no one's looking at Google Reader, so here's A List of Books with which to delight the senses. I stole my format from Adam at Roof Beam Reader, because he's spiffy and does things like this well. As for what I say in this post, well...again, it's late. 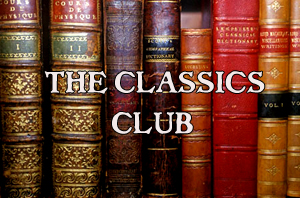 50 Classics I Plan to Read in the Next 5 Years
Hosted by Jillian at A Room of One’s Own
Pre-1700
Pilgrim's Progress, John Bunyan
AND THAT IS ALL, BECAUSE BOOKS PRE-1700 SUCK. It was too long ago.
1700s
Moll Flanders, Daniel Defoe
The Monk, M.G. Lewis - AKA The Best Book Ever Written. Demon nuns! Elopements! Perfidious monks!

1800s
Daniel Deronda, George Eliot
The Woman in White, Wilkie Collins
Villette, Charlotte Brontë
Cranford, Elizabeth Gaskell
The Blithedale Romance, Nathaniel Hawthorne - Unlike the Emperor with Anakin Skywalker, I do not watch Hawthorne's later career with great interest.
Barnaby Rudge, Dickens
Martin Chuzzlewit, Dickens
Dombey and Son, Dickens - You might think I'm reading a bunch of the unimportant Dickens books in a row, but really I'm reading them chronologically, and this was apparently his Sucky Period.
The Fall of the House of Usher, Edgar Allan Poe
Notre Dame de Paris, Victor Hugo
Frankenstein, Mary Wollstonecraft Shelley - Yeah, I know, everyone's read it. And I tried. But it's fricking boring. Damn Romantics with their "thoughts."

1900s
The Hours, Michael Cunningham
Memoirs of a Geisha, Arthur Golden
The Reader, Bernhard Schlink
The Shipping News, Annie Proulx
The March, E.L. Doctorow - What can I say? Ragtime was way awesome.
Billy Bathgate, E.L. Doctorow
The Black Dahlia, James Ellroy
The Pigeon, Patrick Suskind
Perfume, Patrick Suskind
Dirk Gently's Holistic Detective Agency, Douglas Adams - LOOK. I got these from the 1001 Books to Read Before You Die list, and if you have an issue with any of them, you take it up with the editor.
The Long Dark Teatime of the Soul, Douglas Adams - HOW DO YOU NOT READ THIS BASED ON THE TITLE
Contact, Carl Sagan
The House of the Spirits, Isabel Allende
Lanark: A Life in Four Books, Alasdair Gray - This is supposed to be a weirdass book
Breakfast of Champions, Kurt Vonnegut
Slaughterhouse-Five, Kurt Vonnegut
Do Androids Dream of Electric Sheep?, Philip K. Dick
Master and Margarita, Mikhail Bulgakov - Or 'Булгаков' for those of us who're feeling fancy
The Third Policeman, Flann O'Brien
Wide Sargasso Sea, Jean Rhys
The Graduate, Charles Webb
A Confederacy of Dunces, John Kennedy Toole - YES. COME TO ME, YOU IRRITATING AND HORRIBLE MAN, IGNATIUS J. REILLY
O Pioneers!, Willa Cather
The Collector, John Fowles
Catch-22, Joseph Heller
Casino Royale, Ian Fleming
The Grapes of Wrath, John Steinbeck - Anyone else get that Veggietales song stuck in their head? "We are the grapes of wrath/So stay out of our path"
Gormenghast, Mervyn Peake
Love in a Cold Climate, Nancy Mitford
Brideshead Revisited, Evelyn Waugh
Miss Pettigrew Lives for a Day, Winifred Watson - I hope to one day have a friend named Winifred. And I shall call her "Winnie" and we shall laugh and drink tea and there will be doilies.
Tender Is the Night, F. Scott Fitzgerald
Miss Lonelyhearts, Nathanael West
Testament of Youth, Vera Brittain
Nightwood, Djuna Barnes - ALL THE SAD LESBIAN BOOKS (they're pretty much all sad)
The Good Soldier, Ford Madox Ford
The Forsyte Saga, John Galsworthy
Sister Carrie, Theodore Dreiser

Do I think I'll actually get to all these in the next five years? Ehhhhhhhhhhh who can say. But I like lists, so there we have it.