March 20, 2012
Guess what today is? REVIEW day. Of an honest to goodness ARC.
So this is about M. Dickson's book, Dear Dad: It's Over (released this May, but available for pre-order).

Before reviewing this, I should state that the author and I are twitter friends (based on our mutual love of reading about serial killers and watching Designing Women), and that she is hilarious. I would say this makes me biased about her book, but this book is not about being hilarious. It's about opening herself up emotionally and discussing her tempestuous relationship with her father. 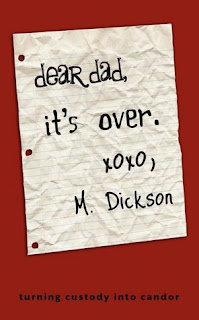 At first glance, it seems like a girl just telling stories about how her father was a pretty shitty dad, but it is one of, in my own experience anyway, the most obvious picks for the You Shape What You Get Out of Your Own Life genre. Because this is about her stopping an extremely painful cycle and taking control of the level of horribleness she'll allow into her life.
I  grew up in a somewhat churchy environment, which was enhanced when I went to a Christian high school. I didn't know anyone whose parents were divorced. No one.
It was only when I got to college that I started meeting people who had grown up with a single parent, usually a mom, and for most of them the dad was no longer in the picture, and therefore couldn't be an active force for good or evil. Since I was, by then, out of the childhood phase where you could just kind of blatantly ask your friends 'HEY, what's up with you having divorced parents?', I've never really seen what that life is like. So for me, part of this was an educational experience.
The writing's a little rough in places, but considering her age (*cough*whichismyage*cough), that takes a backseat to the messages conveyed and the way she decides to lay herself open and show a tremendous amount of vulnerability. I find this almost astounding for someone in the Millennial generation, because sincerity: it is not our forte. It's much easier to hide behind humor or use hyperbole than to be genuine (truest statement of EVER).
It's written in a series of essays, each highlighting a particular incident with her father. And yes, this kind of one-sided presentation can lead one to be a little 'But what would HE have said about that situation?', only it's less about what he did and more about her interiority in the wake of those incidents. Meaning yes, he did this terrible thing and maybe he has some excuse for it, but at some point excuses don't cover how you make another person feel and you just need to bite the bullet and say you're sorry, no matter how justified you feel in your actions.
It's a quick read and what you get is a deep look into someone dealing with the horrible situation that is one parent effectively cutting off their child. I liked it if only because by reading these sorts of things, it helps us understand others better and gives us more compassion. Which, y'know, I hesitate to say we can ever have too much of. Unless it's like, for Hitler. Maybe Stalin. And George Lucas if he continues to refuse to release the original un-enhanced Star Wars trilogy.
In conclusion, read it if you're interested in new perspectives on life. And if you have a similar background, it will probably help instill a sense of camaraderie. And finally, here are some polite bears again: